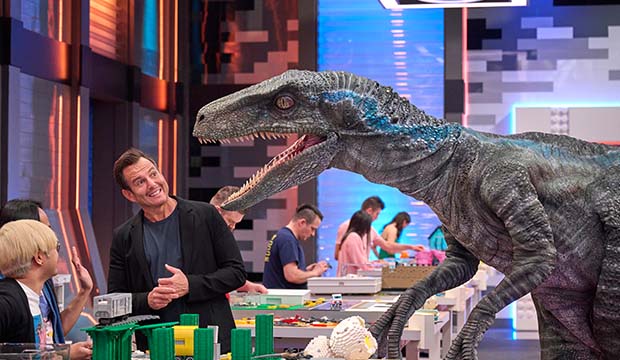 “Lego Masters” is back with Emmy nominee Will Arnett guiding LEGO enthusiasts through a brick blasting Season 3! With infinite possibilities and an unlimited supply of LEGO bricks, teams of two compete against each other in all new brick-building challenges for a $100,000 cash prize, the ultimate LEGO trophy and the grand title of Lego Masters.

Below, follow our Season 3, Episode 2 recap of “Lego Masters.”

9:02 p.m. — Previously, on “Lego Masters”! On the season premiere, 12 new teams launched their mission towards a $100,000 prize by building their very own spaceships. The firemen’s Maltese-Shaped Starship rocketed Stephen & Stephen to the win. In the end, small-town siblings Drew & Miranda were the first duo eliminated. Who will be next?

9:05 p.m. — Teams enter the build room excited for their second challenge. The iconic “Jurassic Park” theme music fills the room as Will explains the biggest, most dangerous builds of these contestants’ lives. They will create an epic action scene that shows dinosaurs exploring our world. They must also add fireballs, sparks, explosions or gunpowder trails as special effects. This challenge lasts 12 hours. Let’s go!

9:10 p.m. — After randomly drawing which special effect they will incorporate, teams begin brainstorming their builds. Emily & Liam are trying to focus on time management, something they struggled with last week. Asiza & Eddie do a quick “smile check,” something they like to do when they get stressed out. Amy tells them their idea doesn’t sound that exciting, so they’ll have to up their game.

9:20 p.m. — While the teams are hard at work a Tyrannosaurus Rex enters the building. It adds a little stress to the situation. Next Chris Pratt enters the room and leaves everyone a bit star-struck. It doesn’t stop them from keeping their noses down in their work.

9:30 p.m. — Jonathan & Xavier are the first team that looks seriously concerned with their build. They’ve tested their “crash” three times and it’s failed on each attempt. There’s still nearly four hours remaining on the clock for them to figure this out. Meanwhile, Asiza & Eddie are concerned with all the empty space in their build. Amy says she’s most excited about Emily & Liam’s build. Jamie is intrigued by what Brendan & Greg are doing. Who are they worried about? Asiza & Eddie and Kerry & Patrick have a lot of work to do.

9:35 p.m. — Stephen & Stephen are feeling the pressure after winning the first challenge. They have spent too much time focusing on their buildings for this project and now their motor functions aren’t working. With one minute left, teams are forced to put the finishing touches on their builds. It’s time for judgement.

9:40 p.m. — Liz & Erin built “Food Truck Fiasco.” It’s lunch time at the food park, but the delicious smells have attracted more than just regular customers! Their special effects dynamite work magnificently and get a “Wow!” from Amy. Next is Brendan & Greg’s “Why Did the Brontosaurus Cross the Road?” It’s a gorgeous dinosaur who spots a female and walks through some power lines and downed them. Jamie calls it “fantastic use of your special effects.” Jonathan & Xavier have built “Dino Traffic Delays.” Two dino families cause a traffic delay in which a train car crashes and a driver jumps out of his truck. Amy is impressed with the chances they took and the risk paid off.

9:45 p.m. — Stephen & Stephen have built “Dinny’s Accident,” an iconic dinosaur walking down a city street that causes some traffic collisions. Unfortunately, not all of the mechanical tricks are working in this build. The explosions are still there, with some nice fire. Jamie says it was “awesome,” but it would have been better with movement. Nick & Stacey have built “Night of the Living Dinosaurs,” a Halloween night in the suburbs. The explosives go off without a hitch and Amy commends their character builds. Dave & Emily have built “Fossil Fuels,” a gas station theme with a gas pump explosion. Jamie calls it “fanstic!” and “super dynamic.” Next up are Austin & Justin with “A Streetcar Named Disaster.” It’s an impressive landscape and Jamie praises their ability to tell a story. Christine & Michelle built “Fiesta Crashers,” where tourists from all around the visit. Uninvited guests ignite the power lines and cause epic explosions. Amy loves that these two “build big” and Jamie says they “know how to hold our attention.”

9:55 p.m. — Asiza & Eddie have built “Roar,” which is based on a true story about the time they took their little sister to see “Jurassic Park.” Amy loves that these two build from the heart, but the scene is flat. The details don’t stand out, but at least the explosives work. Amy adds she wishes they would have elevated the character just a tiny bit. Emily & Liam built “Mosasaurus  Mayhem,” telling the story of the king of the prehistoric ocean. It crashes into a boat, with the sailor jumping for his life. Amy says she has goosebumps from the scale of this build. “An absolutely epic scene.” Last, Kerry & Patrick have built “The Peaceful Valley,” a story about the rebirth of chaos. Amy calls it “fun to watch” but suggests they edit down their story.

10:00 p.m. — Now it’s time to reveal the bottom two teams — Kerry & Patrick and Asiza & Eddie. Sadly, the team going home tonight is Asiza & Eddie. Amy says it’s been a joy to watch them build. They lit up the room with their stories. The brother/sister duo is proud of their “epic adventure” and it will always hold a special place in their heart.