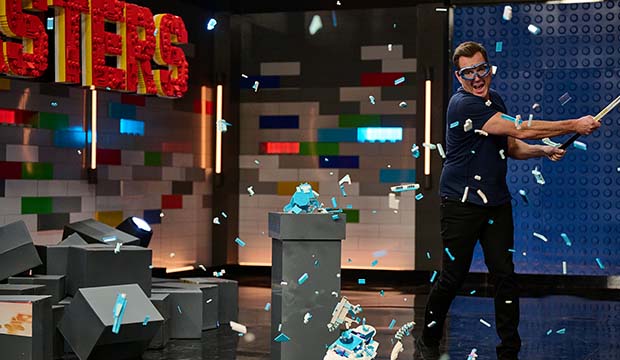 It’s a race to the top as the contestants build tall, strong and stylish castles using only regular bricks. Medieval minifigures selected from a hat determine the theme of each team’s castle. The team that builds the tallest castle is safe from elimination. However, none of the castles are safe from the judges’ wrecking ball that ultimately decides the best execution of the challenge in the all-new “Wrecking Balls to the Walls” episode of “Lego Masters” airing Wednesday, Nov. 23 (9:02-10:00 PM ET/PT) on FOX.

Below, follow our Season 3, Episode 9 recap of “Lego Masters.”

9:02 p.m. — Previously, on “Lego Masters”! On Episode 8, contestants faced off in a mini golf challenge. Each team transformed a putting green into a playable mini golf hole, complete with obstacles that propelled the ball and a story within the build. Austin & Justin won the Mini Golf Masters jackets while Ethan & Dom were carted away. How will things unfold this week?

9:07 p.m. — The contestants return to the build room as a giant wrecking ball knocks down a wall for Will’s grand entrance. Jamie and Amy follow along as the host reveals the next challenge: A test of strength, height and style. Teams will build their very own tough-as-nails castles. For today’s challenge the tallest castle will be safe from elimination, but it will have to be safely moved to the judging area without any technic elements.

9:15 p.m. — Three hours into the challenge “Evil Will” makes an appearance to deliver an unexpected twist — in the end, everyone’s castle will be smashed to pieces. Wait, everyone already knew that! I guess that was pointless. Oh well, start the clock back up — six hours remain.

9:30 p.m. — Dave & Emily are vocally competitive about going for the highest castle. They’re sick of coming up shy of a win and they want immunity. They’re most concerned about Nick & Stacey, who also have an ambitiously high build. Meanwhile, Stephen & Stephen are more concerned about stopping Will’s wrecking ball from blasting their castle. The base of the build from these fire fighters is intense.

9:35 p.m. — As time winds down builders put the finishing touches on their castles. With just seconds to go, Nick & Stacey add a snowflake atop their castle, hoping to secure their safety for the week with the tallest castle. Meanwhile, Brendan & Greg opt out of using their golden brick, making them eligible for elimination.

9:45 p.m. — It’s time to display these castles and then wreck them. Dave & Emily are up first with their Forest Maiden in “The Forest Haven.” The Brickmasters call it “gorgeous” and “fantastic.” Next up is Nick & Stacey. As they wheel theirs over, the snowflake falls off! That could make way for Dave & Emily to win immunity with the tallest build. Their Snow Guardian in “The Arctic Fortress” is “rough around the edges” and “not as polished” as the Brickmasters would have liked. Emily & Liam are up next with their Troll Queen in “The Cursed Keep.” Amy praises the color, but Jamie calls the roof “basic.”

9:55 p.m. — Austin & Justin are up next with Wizard in “The Wizard’s Duel.” Jamie loves the wizard hat at the top, but Amy says it’s “more chaotic” than she would have liked. Brendan & Greg are next with Jester in “Jolly Ol’ Jesters.” Amy is thrilled to see more playfulness in their build. Jamie praises their attention to detail and says, “It really made me smile.” The final team is Stephen & Stephen with Troll in “Troy’s Troll Bridge.” Amy likes the classic castle theme of their build, and the strength of the base. But can it withstand the wrecking ball like they hoped? The base holds firm, impressing the Brickmasters with their “shockingly strong” build.

9:57 p.m. — The team with the tallest castle and immune from elimination is Dave & Emily! They’ve also been chosen to be in the top two along with Brendan & Greg. The winners of this challenge are…Brendan & Greg!

10:00 p.m. — The bottom two teams are Austin & Justin and Nick & Stacey. The Brickmasters decide to eliminate the doctors, Austin & Justin. That’s a wrap for tonight.