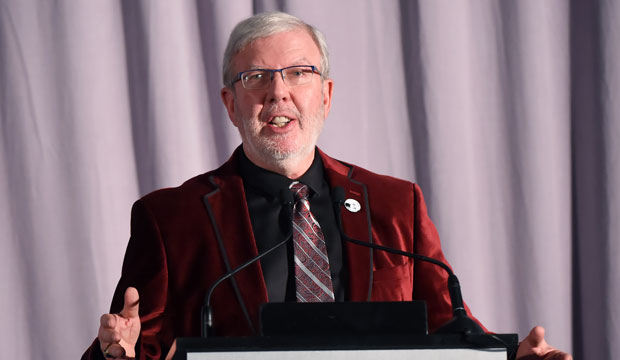 Leonard Maltin is sitting in his home office surrounded by his first love: cartoon strips. He wanted to be a cartoonist. Got some early inspiration from Charles Schultz. But he started writing to celebrities when he was a kid. It’s all chronicled in his book “Starstruck: My Unlikely Road To Hollywood.” He printed up some “cheap stationary” with his name on it, and he was in business.

“I wrote to Dick Van Dyke because I heard he was a fan of ‘Laurel and Hardy,'” Maltin admits. “And I said, ‘Even though I’m only 12-years-old I’m a big fan too.'” He wrote back in beautiful penmanship on the bottom half of my letter that ‘Laurel and Hardy’ were the funniest couple to face a camera until Liz and Dick came along. That was an early ’60s joke about Taylor and Burton.”

SEEHow good are the SAG Awards at predicting the four acting winners at the Oscars?

Maltin eventually turned to movie reviews and began a 30-year run at the syndicated powerhouse “Entertainment Tonight.” When I point out that some argue the posting of weekend box office numbers — first done on that show — was the beginning of the end for small movies that would build and grow, he agreed but defended his old bosses. “It’s true. They didn’t mean to. But on the other hand there’s always been a New York Times Best Seller list. So this was kind of the movie equivalent. People like seeing or reading something that other people like too.”

As a show business insider, the 71-year-old has covered every major awards show, but never actually taken a seat in the auditorium. “I’ve covered the Oscars but never attended. I used to joke that I put on my tuxedo when the show was over. For 30 years at ‘Entertainment Tonight’ I would do the wrap up commentary outside at the end. I didn’t want to see them. I watched them since I was 11-years-old on TV, and I was happy keeping it that way.”

SEEOlivia Colman dethrones Kristen Stewart in Best Actress Oscar odds, but should the Queen of Upsets be the favorite?

And of the recent decision to Tweet out the Golden Globes? Maltin is blunt. “Do we need the Golden Globes? The success of that show was two words: open bar. Everyone was well lubricated.” For the Oscars this year he won’t predict a host, but says the academy should never call it “host-free.” “That’s baloney, they have two comics come out and do material at the top of the show. That’s the same thing.”

He still compiles a top-10 list every year and is pulling for a few films at the Critics Choice Awards and Oscars. “I liked ‘Nightmare Alley,’ and though I do have some holes to poke in it I liked Steven Spielberg‘s ‘West Side Story,’ I like ‘Dune’ and ‘CODA’ and the animated film ‘Luca’ and I liked ‘Licorice Pizza.’ But I live in the San Fernando Valley so I understand the memories that Paul Thomas Anderson is evoking.” And if someone like Anderson optioned “Starstruck” who should play Maltin? “Me. And believe me, I’m available.”