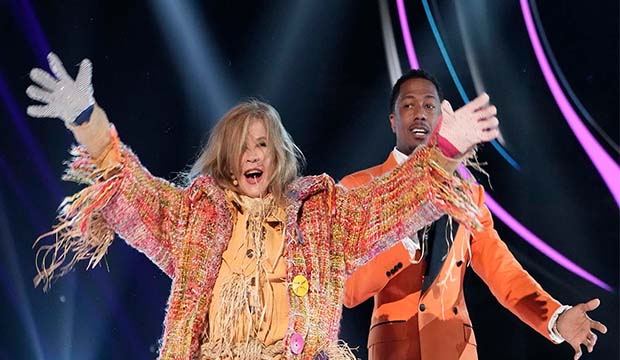 Two all new celebrities in disguise took to “The Masked Singer” stage for “Fright Night” on Wednesday, November 23, singing their hearts out and coming for Snowstorm’s crown. After giving a spooktacular performance of  “Abracadabra” by the Steve Miller Band, Scarecrow voluntarily withdrew from the competition prior to the evening’s Battle Royale. The “wicked” performer was revealed to be Academy Award nominee and Golden Globe winner Linda Blair.

“Let me tell you what you do for me and for the world,” Blair told host Nick Cannon and panelists Robin Thicke, Jenny McCarthy, Ken Jeong and Nicole Scherzinger during her unmasked interview. “You take us out of what is the most difficult time in history, right now, for one hour a week of entertainment. I deal with animals being abused, thrown away on the streets. I have a foundation called the The Linda Blair Worldheart Foundation. I travel the world. I do what I can to make it a better place. You all have no idea your kindness and your love. And if you can heal me, in as much pain as I am in to try to save those that don’t deserve what’s happening, we can do better. I feel you are my family.”

None of the panelists were able to guess Blair was hiding within the the Scarecrow. Their final guesses were Parker Posey (Ken), Glenn Close (Jenny), Susan Sarandon (Robin) and Jamie Lee Curtis (Nicole).

In her clue package Scarecrow revealed, “Hold on to your britches friends, because I’m the scariest contestant in ‘Masked Singer’ history. I made fans scream and critics crazy. And I had to bend over backwards to get the academy to recognize my work. I’ve turned plenty of heads in my career. I even sang on Broadway! But I traded the shining bright lights of the red carpet for green pastures, and devoted my time to saving animals. In fact, I made over 100 rescues. But it’s you, panel, who’s going to need rescuing. Because I’m about to turn out a hair-raising performance. See you in your nightmares, Ken!” Visual clues in Scarecrow’s package included clothes hanging on a clothes line, a golden globe, rollerskates, a pumpkin holding an “X” and a sign that said “Wes Craven was here.”