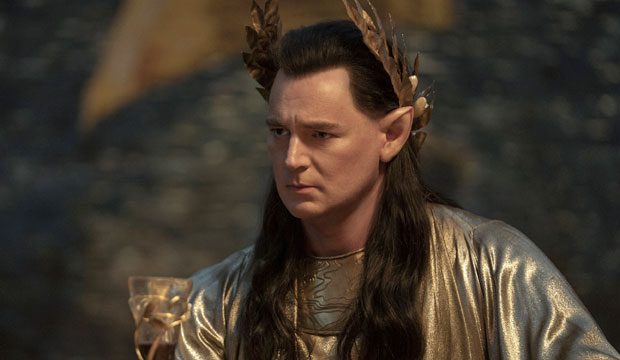 “The Lord of the Rings: The Rings of Power” unveiled a shocking backstory about the coveted ore mithril which is set to shake up relations between elves and dwarves for generations. As elven high king Gil-Galad (Benjamin Walker) waded through this new mythology, I found myself filled with awe and skepticism at the same time. So let’s walk through why this Middle Earth nerd thinks Gil-Galad is a big fat liar!

It was clear that Gil-Galad had ulterior motives when he sent Elrond (Robert Aramayo) into the mines of Moria. And in this episode, Elrond learns that he was really sent there for the purpose of obtaining mithril. That’s the shiny ore the dwarves have just discovered deep within the mountain, which they will eventually use to craft lightweight but ultra-strong armor (like the mithril vest which saves Frodo’s life in “The Fellowship of the Ring”). Gil-Galad is clear that the spirit of the elves is diminishing, as evidenced by the decaying tree of Lindon. According to him, if the elves don’t get their hands on mithril, they will either have to catch an early ship to the Grey Havens or else wither away and die.

Mithril will supposedly save them because of the myth behind its creation. According to a legend known as “The Song of the Roots of Hithaeglir,” mithril is the resulting product of an epic struggle of good vs. evil. In the first age, an intense battle between an unnamed elf and a balrog took place atop one of the peaks of the Misty Mountains. The elf had discovered that a Silmaril lay hidden in a tree at the top of the mountain, and he sought to reclaim the object while the balrog wished to destroy it. As the battle raged on, the elf poured his light into the tree to protect the Silmaril and the balrog poured into the tree his darkness. A lightning bolt struck the tree during this moment and combined these elements of good and evil with the light of the Silmaril. It rippled through the tree’s roots and deep into the mountain to create the ore now known as mithril.

It’s a grand tale if true, except “The Lord of the Rings” author J.R.R. Tolkien never wrote anything resembling this history. Not only is this origin story not even hinted at by the writer, it actually threatens to upend a chunk of his lore. That’s why I think this whole backstory is a smokescreen for Gil-Galad to enact some much more ambitious, potentially unpopular plan.

If you aren’t on board with that concept yet, then let’s take a brief detour into Silmarils and their importance. Silmarils were Tolkien’s original MacGuffins, before Sauron’s ring became the One MacGuffin to Rule them All. They were three jewels crafted by Feanor, an ancient elf king, which contained the essence of the Two Trees of Valinor inside them. After the two trees were destroyed, Morgoth stole the gems and set them in his crown. One would be retrieved and set into the sky by the Valar, becoming the star known as The Star of Earendil. The other two Silmarils would be recovered from Morgoth after The War of Wrath (the battle glimpsed briefly in the first episode of “The Rings of Power”) by Feanor’s sons Maedhros and Maglor. Maglor cast his gem into the sea while Maedhros threw himself and his Silmaril into a fiery pit deep in the earth.

SEE‘The Lord of the Rings: The Rings of Power’ drops new trailer

This history makes The Song of the Roots of Hithaeglir myth implausible since Tolkien has accounted for the fates of all three Silmarils. Unless the tree atop the Misty Mountain sprouted from the fiery pit where Maedhros died, or if Maglor’s Silmaril was miraculously recovered from the bottom of the ocean, there should not be any Silmaril in play at the time of this legend. Furthermore, Silmarils are some of the most important items in the history of Middle Earth. They contained the last light from the elves’ sacred trees, and so were coveted by all elves as divine objects. The gems also enchanted Morgoth, and he obsessed over them almost as much as Gollum pined for the One Ring. The concept that one of these highly sought gems would be not only unearthed from its resting place, but casually stashed in a tree, is absolutely wild.

Either this legend does not tell the whole truth, or Gil-Galad is up to some secret shenanigans. Or both! We know that mining for mithril will eventually lead the dwarves to unleash a balrog hidden within the mountain, and this tale provides a neat explanation for why the creature would be there. Perhaps it is the same balrog from the myth, who dives deep into the mountain in an attempt to snuff out all the light of the Silmaril?

But we have already seen Gil-Galad keep his cards close to his chest in this series. For instance, he sent Galadriel (Morfydd Clark) to the west because he secretly had a vision that her quest to stop Sauron would inadvertently result in his resurgence. Perhaps Gil-Galad is preparing for the Dark Lord’s return, but the elves are truly fading and he doesn’t believe the race of men is capable of defeating him. Perhaps he believes that a few rings of power, forged out of a material that contains the divine light of his people, would be enough to stop the fading of the elves so they can make a stand against Sauron. If he thinks some mithril rings are the only hope for his people, and for all Middle Earth, he would need one hell of a story to convince the likes of Elrond to wreck inter-species havoc with the dwarves. The Song of the Roots of Hithaeglir is indeed one hell of a convincing tale, but not all of it may be true.