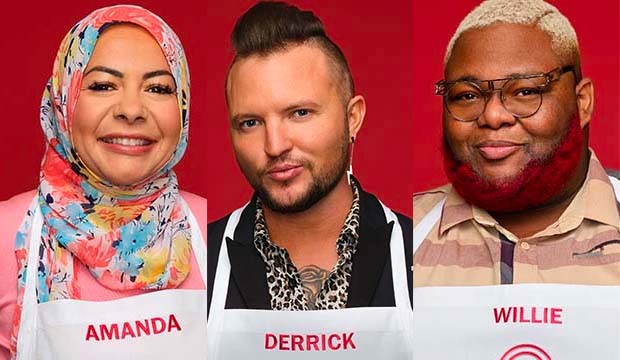 A triple elimination took place on “MasterChef” last night when Episode 16 and Episode 17 of Season 12 aired back-to-back on FOX. The Top 8 were paired together and tasked with communicating on opposite sides of a wall to create identical dishes with a double elimination on the line. Judges Gordon Ramsay, Aaron Sanchez and Joe Bastianich sent Amanda Saab and Derrick Fox home for poor communication and a bad Crispy Skin Duck with Moroccan-Style Couscous, Romanesco and Blood Orange Gastrique.

Next, the Top 6 took over Chef Wolfgang Puck’s kitchen at the famous Spago restaurant in Los Angeles. Willie May failed to show the leadership qualities it takes to win and was asked to turn in his apron at the end of the night. Do you think Amanda, Derrick and Willie deserved to get the boot this week? Vote below in our poll.

Amanda, Derrick and Willie weren’t the only chefs in the hot seat on Wednesday. Dara Yu and Shanika Patterson barely survived the wall challenge when the judges called their Blackened Trout with Salsa Verde, Roasted Corn and Sautéed Mushrooms “straight out of your first year of culinary school.” Michael Silverstein and Shanika were also on Willie’s losing Blue Team at Spago. Shanika refused to step up as a leader and Michael served raw meat to Wolfgang Puck himself!