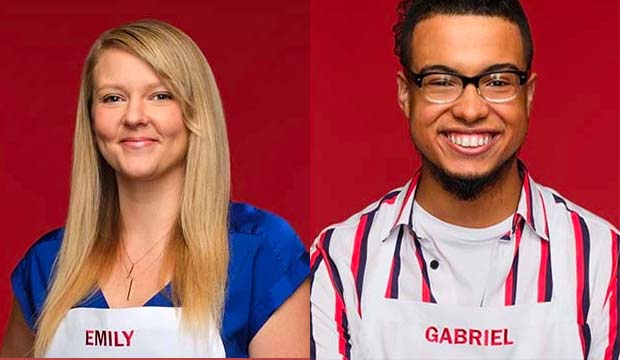 Gabriel Lewis was the first home cook sent packing on last week’s double episode of “MasterChef: Back to Win.” The 24-year old from Oklahoma City failed to impress judges Gordon Ramsay, Aaron Sanchez and Joe Bastianich in a Tag Team challenge that partnered him up with Emily Hallock. The duo struggled with Gordon’s signature dishes — Mushroom Risotto, Beef Wellington and Tarte Tatin — but it was Gabriel’s lack of voice that ended his hopes of winning the Fox reality TV cooking competition.

In our recent poll, where we asked you to pick which chef-testant you think deserved to be eliminated, 45% said Emily deserved to go home. 18% agreed that the night’s second elimination of Fred Chang was spot on after he served up Italian Meatball Potstickers with charred Tomato Relish and Parmesan Crisp that the judges called “wrong on so many levels.” 15% of fans would have sent Willie Mike home for his “bizarre” Chicken & Rice Meatballs with Apricot & Plum Sauce and Charred Vegetables. Only 12% of our readers think Gabriel deserved to go home and 10% said Dara Yu should have been eliminated after finishing at the bottom of the Tag Team challenge, but among the Top 3 of the GrubHub contest.

In the episode, the Top 12 chefs approached the halfway point in the competition and were challenged to a tag-team cook-off. They were tasked with choosing a partner and cooking three menu items from Gordon’s Michelin-starred restaurants, taking turns against the clock. Next, in order to secure a spot in the top 10, the remaining chefs partnered with GrubHub to elevate a traditional take-out dish into a gourmet concoction. Derrick Fox won the GrubHub challenge, earning him the immunity pin and safety for the next week. Michael Silverstein and Dara rounded out the Top 3.