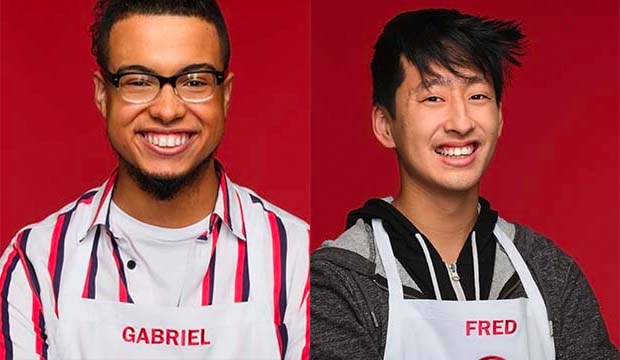 Viewers got a double dose of “MasterChef” last night when Episode 12 and Episode 13 aired back-to-back on Fox. As the top 12 chefs approached the halfway point in the competition, they were challenged to a tag-team cook-off. After cooking three menu items from Gordon Ramsay’s Michelin-starred restaurants, Gabriel Lewis was eliminated. Gordon and his fellow judges Aaron Sanchez and Joe Bastianich said the 24-year old lacked a voice while tag-teaming on the host’s famous Mushroom Risotto, Beef Wellington and Tarte Tatin.

Next, in order to secure a spot in the top 10, the remaining chefs partnered with GrubHub to elevate a traditional take-out dish into a gourmet concoction. Fred Chang’s Italian Meatball Potstickers with charred Tomato Relish and Parmesan Crisp were called “wrong on so many levels” before he was shown the door. Do you think Garbriel and Fred deserved to get the boot this episode? Vote below in our poll.

Gabriel and Fred weren’t the only chefs in the hot seat on Wednesday. Emily Hallock barely survived as Gabriel’s tag team partner. Dara Yu also received low marks cooking up Gordon’s standards when she partnered with Fred in the first half of the episode. In the GrubHub portion, Willie Mike’s Chicken & Rice Meatballs with Apricot & Plum Sauce and Charred Vegetables landed him in the bottom two. The dish left the judges “completely perplexed” and Gordon called it simply “bizarre.”