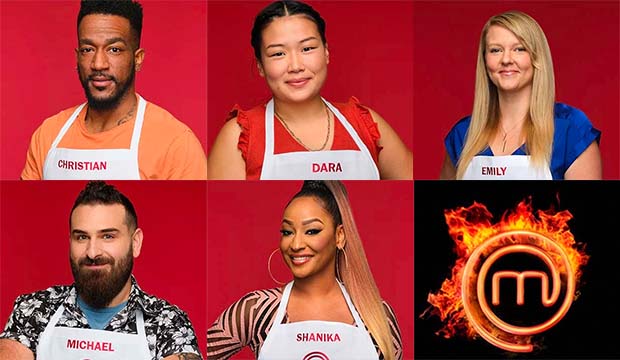 The Top 5 were revealed on the latest episode of “MasterChef” and each of them are now a one dish closer to being named the Season 12 champ. Who is left and who stands the best chance of impressing judges Gordon Ramsay, Aaron Sanchez and Joe Bastianich? Here are my assessments.

Read our “MasterChef 12: Back to Win” Top 5 power rankings below (from worst to best) for our thoughts on how each of them could potentially take home the $250,000 grand prize. Then be sure to sound off in the comments section about your favorite home cooks on Fox’s reality TV show and who you think will ultimately join the “MasterChef” winners list.

5. Emily Hallock: On this show, confidence is key and being overly confident is the kiss of death. Her dishes look delicious but at the end of the day, they are not exactly plated in a memorable manner nor do they sound particularly mouthwatering. Her performance in the wall challenge was not her shining moment. The dish did not look as good as her partner’s, but clearly they did something right! At Spago, Emily did not leave much of an impression, but she was the one contestant that seemed to be the least nervous out of everyone towards the end of the night. Always a plus! She could ride this momentum all the way to the finale if she keeps being a silent assassin, but it seems unlikely.

4. Dara Yu: Dara has produced some amazing looking dishes since my last power ranking of the Top 10, but I still feel the same way that I felt then. They all seem basic. I am sure they are delicious, but the dishes are not screaming “Wow” to me. Gordon’s assessment that her most recent dish sounded like something from week one of culinary school more than proved my point. Dara started off a little rocky at Spago, but by the end of the service she seemed pretty content with her performance and it seemed like a real confidence boost for her. She needs to focus on the task at hand in order to become unstoppable.

3. Christian Green: Christian continues to wow the judges and in recent weeks has even won one of the last immunity challenges. Saying that, the dishes as of late do not seem as creative as the ones he was serving up earlier in the season. His blood orange white wine sauce looked amazing but there did not seem to be enough of it in the Wall challenge, which was sad to see since the rest of the dish looked incredible. Was I surprised that he had a bit of a rough go of it as team captain? Yes. Did he do a good job as team captain? Yes. In short, no harm no foul. I do not think he can afford to have another night like this down the road though.

2. Shanika Patterson: Peaking at just the right moment, Shanika has really wowed the judges and is riding a high of challenge wins as well as delicious dishes. The Wall challenge was not her shining moment but that dish looked amazing nonetheless. At Spago, Shanika seemed to have the most level head out of the blue team, which was great. She made a great case for being this episode’s MVP.

1. Michael Silverstein: Michael is clearly one of the most talented chefs this season. He has produced more predictable dishes as of late, which is not a bad thing but not a great thing either. The wall challenge did him no favors either, but the end result looked amazing to say the least, even with the medium cook on the protein. His performance at Spago left a lot to be desired frankly. He seemed very out of his element for most of the service. Saying that, he shines individually in the MC kitchen so he should bounce back. My confidence in him winning has taken a bit of a hit after seeing him and my former frontrunner Derrick Fox play second fiddle last week, refusing to go with their gut instincts and lead. That said, if I had to put my money on someone right now, it’s Michael.