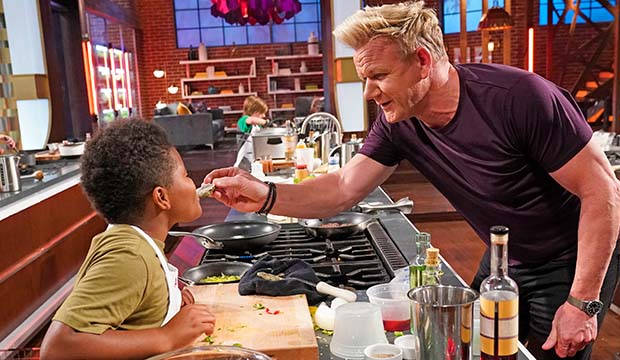 The best young home cooks between the ages of eight and 13 have been cast to compete in Season 8 of “MasterChef Junior” on Fox. Once again, Gordon Ramsay leads the judging panel and is joined by renowned chef Aarón Sánchez and Emmy-winning talk show host Daphne Oz. The winner of “MasterChef Junior” wins the coveted trophy and $100,000. They’ll also take home a brand new Viking kitchen, amazing countertop appliances, kitchen tools, bakeware and a trip to Caesar’s Palace in Las Vegas.

SEE Aarón Sánchez on ‘MasterChef Junior’ season 8 and challenging Gordon Ramsay in the kitchen: ‘I could kick his ass’

Below, read our minute-by-minute “MasterChef Junior” recap of Season 8, Episode 10, titled “Junior Edition: Totally Egg-streme!” to find out what happened Thursday, May 19 at 8:00 p.m. ET/PT. Then be sure to sound off in the comments section about your favorite young cooks on Fox’s reality TV show and who you think has what it takes to win the entire competition.

8:00 p.m. — Previously on “MasterChef Junior”! The top 8 split up into two teams of four and baked desserts for a rowdy bunch of kids. The Blue Team overcomplicated things and ultimately fell short. Abir’s cookies left a bad taste in the judges’ mouths and ultimately the 10-year old was sent home to San Ramon, California. Now seven contestants remain in contention for the “MasterChef Junior” title!

8:05 p.m. — As the kids enter the “MasterChef” kitchen they meet Oscar the ostrich. Tonight, for their chance at immunity, the contestants will have 45 minutes to cook the judges an incredible egg dish. Because there are seven chef-testants, Gordon presents them with seven different types of eggs: Ostrich, emu, goose, duck, turkey, chicken and quail. The young home cook with the most impressive dish will be safe from tonight’s elimination challenge. 45 minutes on the clock. Time starts now!

8:15 p.m. — When asked which eggs are most difficult to work with, Daphne says quail eggs are so small that they are easy to overcook. On the other end of the spectrum, ostrich eggs are huge and that’s a lot to work with. Little Ivy is cooking an ostrich egg that’s about the size of her head! Ivy seems to think Liya and Grayson are here biggest competition in this contest. Gordon messes around with A’Dan and serves him up some oyster juice, telling the youngster it will “put some hairs” on his chest. It’s always fun seeing Gordon joke around with the kids. Time expires and it’s time to see what everyone cooked.

8:25 p.m. — The first person in the Top 3 is Grayson with his Steak Benedict consisting of Turmeric Poached Goose Egg, Filet Mignon, Espelette Hollandaise in a Potato Nest. Gordon says the potatoes are delicious, the eggs could cook a little longer, but it’s adventurous. Next is Eva with her Huevos Rancheros with Emu Egg, Black Bean Puree and Spicy Chipotle Aioli. Daphne says the creamy eggs are the star and it’s a delicious bite. The last contestant with a chance at immunity is A’Dan with his Spicy Hangtown Fry with Scrambled Chicken Eggs, Fried Oysters and a Hot Sauce Aioli. Aaron loves how A’Dan elevated the egg and says it tastes “spectacular.” Daphne says what he put on the plate today has shown “so much growth.” Gordon says he plated like a pro. The winner of this challenge is A’Dan! He will head up to the balcony and become the first member of the Top 6.

8:30 p.m. — It’s time for the next elimination challenge. To survive this challenge they will have to serve a “MasterChef”-worthy beef dish. There are a variety of beef cuts to work with, but only one cut of each kind. A’Dan gets to choose the order of which cook chooses their cut of meat first. His order is Molly, Cruz, Ivy, Eva, Liya and Grayson. A’Dan admits he’s most concerned about Grayson and Liya in this competition, so it’s no surprise he chose them last.

8:45 p.m. — Medics are called in after Cruz takes a slice to the finger. I hate when that happens, ouch! Cruz says “nothing’s going to stop this big boy from getting to the finish line,” lol. Things go relatively smoothly after that and everyone finishes their dishes without anymore drama. Let’s see how they turned out! Grayson is called up first with his Mis Marinated Tri-Tip with Crispy Rice Cakes, Sauteed Bok Choy and Ponzu Caramelized Maitake Mushrooms. Aaron says the cook on the steak looks “text book,” but it lacks interesting flavors. Daphne would have liked some spice or glaze. Gordon isn’t impressed.

8:50 p.m. — Molly serves up Filet Mignon with Creamed Spinach, Crispy Onion Rings and Bearnaise Sauce. Visually, it looks unfinished. Aaron thinks it looks sparse. The steak is overcooked, but it’s seasoned well. Molly bursts into tears. Eva is called forward next with Flank Steak with Pureed Potatoes, Ratatouille Tomatoes and a White Wine Sauce. Gordon says the steak is cooked beautifully. Daphne loves the tomatoes, but everything needs more salt. Aaron says the white wine sauce was a miss (it should have been red), but everything else is good.

8:55 p.m. — Now Ivy serves Flat Iron Steak with Romesco Sauce, Crispy Fingerling Potatoes and Grilled Vegetables. Gordon loves the sear on the steak. The vegetables are a little bland. Aaron says she nailed the steak. Next, Liya serves Soy Glazed Skirt Steak with Charred Corn and Vegetable Tempura. Gordon says Liya is starting to cook like an adult and the dish looks fantastic. Daphne doesn’t want to inflate Liya’s head, but it was by far her best dish. Last up is Cruz with Grilled Rib Eye with Green Beans, Potato Gratin and a Horseradish Cream Sauce. Sadly, the steak is overcooked but it’s seasoned beautifully. Daphne says there are things on the plate to be proud of, but it isn’t perfect. Gordon says the potatoes are missing cheese.

8:59 p.m. — The judges talk things over and decide which young home cook will be heading home. First, they announce Liya is the winner of the challenge and her recipe will be published on a website. Ivy and Eva also finished in the Top 3. Cruz, Molly and Grayson are the bottom three this week. Grayson missed the mark. Molly’s steak was overcooked. Cruz forgot cheese on potatoes. The person that is not heading into the Top 6 is Cruz. The eight-year old from Porter Ranch, California can walk out with his head held high.