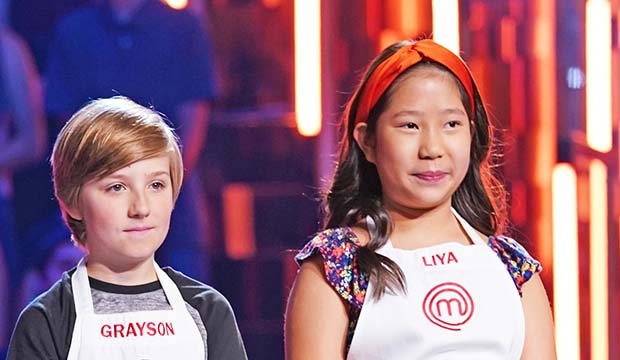 The stakes have never been higher in the season finale of “MasterCher Junior.” The two finalists compete for the best prizes yet: $100,000, brand-new kitchen appliances and a trip to Las Vegas to dine with Gordon Ramsay at his restaurant. With their families and past contestants in the crowd to cheer them on, Grayson and Liya create an entree and dessert that best represents themselves. The chefs face off in two 60-minute challenges to prove they are a MasterChef in the all-new “Junior Edition: The Finale” season finale episode airing Thursday, June 23 (9:00-10:01 PM ET/PT) on FOX.

SEE Aarón Sánchez on ‘MasterChef Junior’ season 8 and challenging Gordon Ramsay in the kitchen: ‘I could kick his ass’

Below, read our minute-by-minute “MasterChef Junior” recap of the Season 8 finale, Episode 15, titled “Junior Edition: The Finale” to find out what happened Thursday, June 23 at 9:00 p.m. ET/PT. Then be sure to sound off in the comments section about your favorite young cooks on Fox’s reality TV show and who you think should have been crowned this season’s champ.

9:00 p.m. — Tonight Grayson and Liya go head-to-head to find out who will be crowned the “MasterChef Junior” Season 8 champ. The chefs will face off in two 60-minute challenges in front of an audience including their families and previous contestants. Let’s go!

9:10 p.m. — The two finalists enter the kitchen as the crowd cheers them on. After recapping each of their journeys, Gordon explains that one entree and one dessert stands between them and the grand prize. They’ll start with entrees, plating one portion for each of the three judges. The 60 minutes starts now!

9:25 p.m. — Grayson says his dish is a love letter to Austin, Texas, where he learned to love food. Liya says she’s using traditional Chinese ingredients and her menu is inspired by her family and her Asian heritage. The judges praise how far each of them have come and how developed their menus sound. Venison is a tricky protein to work with, so Grayson’s choice to use it could lead to a win or a troubling mistake. Liya is a little slow to get her duck in the pan, so hopefully she is taking enough time to cook it. Over at Grayson’s station, the young cook can’t get his smoking gun lit for his potatoes, so he starts to cry. Eventually his dad talks him through it and everything works out fine. At last, 60 minutes expires, entrees are plated and it’s time for the first judgement of the night!

9:30 p.m. — Grayson serves Togarashi Dusted Venison Loin with Smoked Whipped Potato, Blackberry Gastrique and Shishito Peppers. I only know about half of those ingredients. This kid is unreal. Gordon says it looks like it’s from a top five restaurant in Austin, Texas. Aaron says the meat is a perfect medium rare. The venison is delicious and it’s beautifully seasoned. The potatoes could be a bit creamier, but it’s a really good dish. Daphne thinks Grayson nailed the smoke flavor and the sauces were well executed.

9:33 p.m. — Next up, Liya serves Spiced Duck Breast with Scallion Pancakes and Miso Eggplant. The meat is a gorgeous medium rare to the delight of Aaron. Daphne loves the elevated scallion pancake. Aaron says it’s deceivingly simple, but complex. Gordon says the duck breast is utter perfection and the pancakes are delicious.

9:45 p.m. — These young cooks now have one hour to make the best desserts of their lives. The clock starts now! Liya is making a panna cotta, which is literally a dish that sent an adult contestant on “MasterChef: Back to Win” home last week. It’s very ambitious and impressive, but Gordon looks concerned it won’t set. Liya mentions she would love that new fridge because her family’s doesn’t smell good at home. That draws laughter from the audience. Grayson looks confidence with his sorbet. He’s saying words neither I nor Daphne seem to understand. It’s very scientific. Grayson’s mom looks a bit worried, whispering, “He’s still got a lot to do.”

9:47 p.m. — Liya pulls her panna cotta out of the fridge and Gordon mentions, “It doesn’t look like it has settled.” Liya disagrees and says it’s fine. It’s amazing to watch both of these young cooks plate. They’re so beyond any skill level I had at that age. Time has expired and now it’s time to see if Grayson or Liya has the better dessert.

9:50 p.m. — Grayson brings forward his Texas Ruby Red Grapefruit Curd with Fennel Pollen Financier and Pea Flower Sorbet. It incorporates the state fruit of Texas and Grayson loves using scientific elements when he cooks. Gordon says the fragrance is wonderful and it looks beautiful. It’s “absolutely delicious” and “refreshing.” Daphne says the runaway hit was the financier, but the dish was a little heavy with the pollen. Aaron agrees it was heavy-handed with the pollen, but other than that it was fantastic.

9:53 p.m. — Next, Liya brings up Coconut Pandan Panna Cotta with Passion Fruit Coulis and Sesame Tuille. It looks incredible. Daphne mentions that the look of it “wows” them and it looks restaurant quality. Gordon says it’s delicious. It looks simple, but it’s rich and wakes up the palate. Daphne calls it the most simple, but interesting and intriguing dessert. “There’s a constant treasure hunt.” Aaron loves things that look simple, but are really complex and elegant. Based on these comments, Liya seems to have the edge with dessert, but I’m not sure who won out with the entrees. This could be a nail biter!

10:00 p.m. — It’s time to crown a champion. Grayson executed one of the most difficult proteins and it was medium rare throughout. He nails it when it comes to decorative elements, but the mashed potatoes could have been a little more whipped. His dessert was more palate-cleansing than indulgent. The fennel was overwhelming. Liya’s menu was a mind-blowing combination. Her entree wasn’t as attractive as Grayson’s, but it was delicious. Her dessert left the judges’ jaws on the floor, but the tuille didn’t work for Gordon. So who is the next MasterChef Junior? The winner is Liya! What an incredible finale. Congratulations to the youngster from Scarsdale, New York!