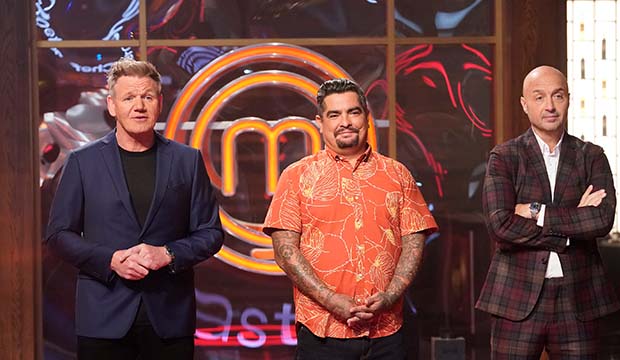 40 chefs get called back to audition, but only 20 will claim a coveted white apron. The returning chefs compete in groups of four in head-to-head audition battles. In each round, the two chefs that create the most impressive comeback dish will secure their spot in the Top 20. Below, read our minute-by-minute “MasterChef” recap of Season 12, Episode 1, titled “Back to Win – Audition Battles,” to find out what happened Wednesday, May 25 at 8:00 p.m. ET/PT. Then be sure to sound off in the comments section about your favorite aspiring chefs on Fox’s reality TV show and who you think has what it takes to join the winners list.

8:00 p.m. — “Previously on ‘MasterChef!” In last season’s finale, Kelsey Murphy became the 11th overall winner when she claimed victory over Autumn Moretti and Suu Khin. Who from this current cycle has what it takes to follow in Kelsey’s footsteps and win the “MasterChef” title, a $250,000 grand prize, a complete Viking kitchen and that beautiful trophy? Let’s find out!

8:05 p.m. —  Gordon shows clips throughout the years of “MasterChef” and notes that for every winner there have been hundreds of losers desperate for another chance. And he’s willing to give them one. It’s a season of redemption for some of the most memorable and talented chefs in the franchise’s history. Gordon plans to hold them to the highest standards in “MasterChef” history.

8:07 p.m. — Season 7 runner-up Brandi was a school teacher before her “MasterChef” experience, but now she owns her own private chef and catering company. Dara was just a 12-year old when she got second place on Season 1 of “MasterChef Junior.” Those are just a couple of quick highlights we see before Gordon, Aaron and Joe emerge. It brings Season 10 15th-place finisher, Michael, to tears. The judges explain there are only 20 aprons this year. That means half of the competitors already have one foot out the door. They must cook their best comeback dish ever while friends and family cheer them on. Let’s battle!

8:12 p.m. — The first four battling are Adrien from Season 2, Derrick from Season 6, Brandi from Season 7 and Natasha from Season 4. All four of them have something unique in common. They were all runners-up on their seasons. Derrick went from a struggling drummer to running a private chef business and cooking at pop-ups around the country. Brandi begins to cry when she thinks about how close she came in Season 7. Gordon has everyone get started on their comeback dishes as we learn more about each one. Adrien’s experience goes back a decade to Season 2. He’s been around the country working his way up to executive chef and opening up restaurants. Natasha was devastated by her loss and thinks about it every day. She has started her own catering business since then and is excited to show what she’s learned over the last eight years.

8:20 p.m. — Derrick is struggling with his pasta dough. He’s starting to freak out and Gordon gives him a bit of advice to keep the pasta from cracking. Everyone else looks relatively calm as time expires and they plate their dishes. Let’s see what everyone cooked. Adrien serves New York Strip with Potato Crumble, Cactus Pico and Bone Marrow Salsa Macha. Gordon calls the pico delicious, but thinks the steak is undercooked. Aaron says he captured the Mexican palate. Joe says the dish shows a lot of potential. Brandi brings forward Seared Venison Loin with Acorn Squash Puree, Blackberry Demi-Glace and Pickled Blackberries. Joe calls it “very well executed.” Aaron thinks the squash is “heavenly.” Gordon says she nailed the venison, but the puree is too creamy. Derrick serves Crab & Ricotta Squid Ink Agnolotti with Tarragon Butter Poached Lobster, Uni and Lobster Cream Sauce. Gordon calls it visually beautifully, but there’s a lot going on. Joe likes the pasta. Aaron thinks the sauce is the beauty of the dish. Gordon just thinks Derrick needs to edit a little bit. Last up, Natasha serves a Deconstructed Cheesecake with Brown Butter Crumb and Lemon & Raspberry Filling. Gordon isn’t a fan of her dry, raspberry powder. Gordon says it shows a lot of confidence. Gordon thinks it’s good.

8:25 p.m. — The judges deliberate and decide which two cooks will earn white aprons: Brandi and Derrick. They’re thrilled to be able to show how much they’ve grown.

8:35 p.m. — The next battle of the night will be Lindsay, Julia, Emily and Shanika. What is their common bond? They were all from Season 9. Julia finished in 7th place that season. Her plan to do better this time around? Just do better and go to the end. Okay! Lindsay finished in 16th place, but she’s convinced she can win it all this time. Before “MasterChef” she was an attorney. Now she owns and operates a bakery and cafe with her wife. Emily made a mistake that sent her home in 10th place on Season 9. Instead of choosing to save herself, she offered to go head-to-head in an elimination round with Shanika and lost. Yikes! Shanika is giving Emily some side-eye shade which makes me hope the two of them both advance just to keep this rivalry burning. Time expires and it’s time to see what each home cook has made.

8:45 p.m. — First up, Lindsay serves Chicken & Dumplings Parisian-Style Gnocchi, Chicken Roulade and Pan Gravy. Gordon thinks the dumplings are terrific but the roulade is a little “floury.” Joe praises the flavors and says it’s well-executed. Next, Julia serves Italian Almond Cake with Espresso Mascarpone Mousse, Braised Cherries and Almond Glass. Gordon questions why she would make a dessert, but Julia hopes she stands out because not many people bake in the competition. Aaron likes the choices Julia made. Joe likes the flavor, but is it enough? Gordon says it’s good, but isn’t sure it’s good enough for All-Stars. Next, Emily presents a Crab & Mascarpone Tortellini in a Lemon Beurre Blanc with Seasoned Crab Salad. Gordon thinks it’s visually beautiful and the pasta is nicely manipulated. Aaron calls it “elegant.” Joe thinks the dish can compete with the best of the best. Shanika is last with her Strawberry Arancini with Honey Goat Cheese Filling and Strawberry Balsamic Reduction. Gordon doesn’t think it looks appetizing. Joe calls it a “curveball.” He asks Shanika, “Do you think I like it or hate it?” Confused, she sort of crosses her fingers and replies, “I think you might like it.” Joe then gushes, “This dish is incredible.” Aaron thinks it’s a little too sweet. Gordon doesn’t know if it’s as good as Joe thinks it is, but it was a nice surprise.

8:50 p.m. — The judges deliberate and decide which two home cooks from Season 9 will get another chance: Emily and Shanika. This fight is not over!

8:55 p.m. — The next battle is called out: Wuta from Season 10, Amanda from Season 6, Lexy from Season 11 and Christian from Season 5. There 45 minutes starts now! After his season of “MasterChef,” Wuta didn’t just go back to being a teacher, he’s been in the kitchen. He’s a private chef and he wants to show the judges how he has elevated his palate. Amanda was eliminated from her season because of a cake that wasn’t finished, so she’s making another one! Bold move from the baker. Lexy says since she left “MasterChef” she has started a small business where she cooks for other people and that builds her confidence. Christian is now a prolific private chef and gets emotional when he says he’s come back to do this for his late grandmother, who died last year.

8:59 p.m. — Time expires and it’s time to see what’s been prepared. Wuta serves a Shrimp Burger with Chili Garlic Sriracha Aioli and Homemade Tots. Aaron calls it perplexing, but straight-up delicious. Gordon wonders if it’s good enough to get back in the competition. Christian made Bourbon Glazed Salmon with Creamy Mashed Potatoes and Sauteed Garlic Spinach. Joe says it looks straightforward and hopes it’s perfect. Gordon says it’s cooked beautifully. Aaron says it’s “rockin’.” Next, Lexy serves Pan Seared Scallops with Fried Calamari and Lemon Cream Sauce. Gordon says the scallops are beautiful, but he’s not a big fan of the calamari. Aaron calls the sauce a miss. Joe thinks she did very, very well. Last is Amanda with Zaatar Olive Oil Cake with Lemon Sesame Snow and Pulled Sugar. Gordon says it looks stunning and it’s delicious, but it needs a touch more olive oil. Can she get back into the competition with a cake? Which two receive the white aprons? Christian and Amanda. That’s a wrap for this Season 12 premiere! Next week audition battles continue.