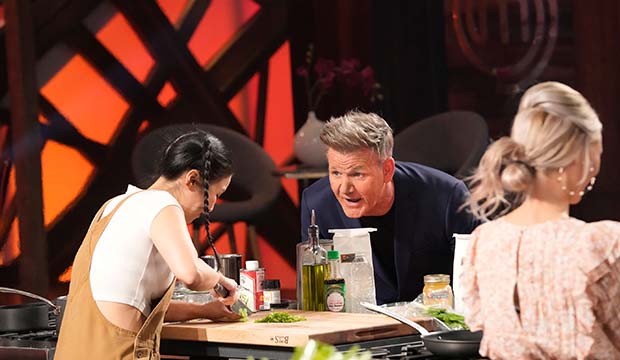 40 chefs were called back to audition, but only 20 claimed a coveted white apron. The returning chefs compete in groups of four in head-to-head audition battles. In each round, the two chefs that create the most impressive comeback dish will secure their spot in the Top 20. Below, read our minute-by-minute “MasterChef” recap of Season 12, Episode 3, titled “Back to Win – Audition Battles (continued),” to find out what happened Wednesday, June 8 at 8:00 p.m. ET/PT. Then be sure to sound off in the comments section about your favorite aspiring chefs on Fox’s reality TV show and who you think has what it takes to join the winners list.

8:10 p.m. — With no time to waste, Gordon calls down four more chefs to battle. Fred placed 10th in Season 10 and might best be remembered for a delicious cake that made Gordon lick his plate after eating. Since then, Fred updates his own food blog three times a week and has quite a following. Felix placed 7th in Season 3 10 yeas ago. Since then she has done catering events, food styling and various food shows. She regrets not cooking Chinese or Taiwanese food the last time she was on “MasterChef.” Olivia placed 8th in Season 6 and now she’s a food stylist who produces cook books. Bri finished 8th in Season 10. Prior to that experience she was a cocktail waitress, but now she focuses on food photography and has a strong social media following. After 45 minutes, it’s time to see what these comeback cooks have made for the judges.

8:15 p.m. — Felix presents Pork Belly & Cabbage Dumplings with Chili Oil. Joe calls the aesthetics “beautiful,” Gordon calls them “delicious,” but the dough is a touch too thick. Bri serves Pan Seared Seabass with Fennell Puree, Tomato Medley, Pickled Serrano Peppers and Tomato Water. Gordon says it looks like something from the cover of a magazine and the fish is “spot on.” The puree isn’t smooth enough. Joe says the dish is firing on all cylinders. Aaron says the seasoning brings it to the next level. Fred serves Dark Chocolate & Tofu Mousse with Kumquat Puree, Black Cacao Ash and Kinako Crumble. Gordon is skeptical that tofu will go well in this dessert. Joe says it’s “flying across the high wire.” Gordan thinks it’s “exceptional.” Olivia presents Pistachio Crusted Lamb with White Bean & Feta Puree, Fennel Slaw and Port Pomegranate Reduction. Joe says it’s beautiful, but under-seasoned. Aaron loves the puree. Gordon loves the dish, but the bottom of the lamb chops are soggy from sitting in the puree.

8:30 p.m. — It’s time for the next battle! Alejandro placed 4th in Season 11. Since then he’s become a private chef, but he still wants this championship trophy in his hands. Jaimee placed 6th in Season 5 and since then she’s been diagnosed with a neurological disorder, but it hasn’t stopped her from cooking. She owns her own cake business now. Keturah placed 14th in Season 10, where she struggled with anxiety. She didn’t believe in herself, but this time she’s here to win. Samantha placed 4th in Season 9 at just 20 years old. Since then she has graduated from culinary school and has more confidence than ever. The 45-minute clock times out and it’s time for the judges to taste each dish.

8:38 p.m. — Samantha prepared Egg Yolk Raviolo with Brown Butter Sage Sauce. It’s cooked to perfection and Joe would be happy to serve it in his restaurant. Gordon calls it “solid.” Jaimee serves Pan-Seared Rainbow Trout with Brown Butter Lemon Garlic Sauce, Salt & Vinegar Chips and Tomato Relish. Aaron likes the color combinations, but thinks it’s very simple. Gordon likes it. Joe asks if it’s a little too “everyday” for this competition. Alejandro serves Coffee-Rub Elk Tenderloin with Bourbon Demi-Glace, Sweet Potato Puree, Wilted Spinach and White Asparagus. Gordon loves the look of it and calls it “delicious,” but under-seasoned. Aaron thinks the asparagus needs some love. Joe loves every component and disagrees with Gordon and Aaron. He thinks it’s perfect the way it is. Keturah serves Seafood Pasta with Uni, Caviar, Tomato Salad and Pickled Blackberries. Gordon is visually confused because so much is going on. After taking a bite, Gordon spits it out in his napkin. He calls it “confusing” and says he is let down.

8:40 p.m. — The two cooks earning white aprons and advancing to the Top 20 are Samantha from Season 9 and Alejandro from Season 11.

8:50 p.m. — The last two aprons are up for grabs! Shelly placed 9th on Season 6 and has since gone to culinary school and started her own business. Malcolm went home in 17th place from Season 4 and hopes to right a wrong by cooking another dessert the judges find worthy of a spot in the Top 20. Sheetal was 4th place in Season 1 and has since launched her own tequila company and continues to be known as the “Spice Queen.” Gabriel finished 7th place on Season 8. He was fresh out of high school last time and Gordon personally sent him to culinary school. He was named the Best Chef 2019 in Oklahoma City and he’s in it to win it. Time is up! Who will win the last two white aprons?

8:59 p.m. — The last two white aprons of the competition will go to Shelly from Season 6 and Gabriel from Season 8. That’s a wrap for the battles. 20 home cooks will now battle it out for the title of MasterChef while 20 others head home disappointed.