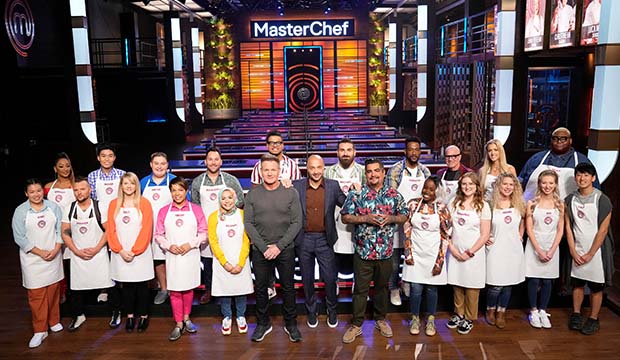 In the first elimination round of the season, all 20 chefs must cook something inspired by the dish that sent them home in previous seasons. Each chef has 60 minutes to prepare identical portions of their dish for each judge, so the presentation matters. The chef that recreates their elimination dish in the most elevated, refined and skillful way will win immunity in the all new “Dish that Sent You Home” episode of “MasterChef” airing Wednesday, June 15 (8:00 – 9:00 PM PT/ET) on Fox. Follow along with our “MasterChef” season 12 episode 4 recap below.

8:00 p.m. — The judges gave away the final 6 aprons to complete Season 12’s Top 20. Now the returning cooks must face off in the season’s first elimination challenge — cooking up something delicious that is inspired by the dish that sent them home last time. Let’s go!

8:10 p.m. — The contestants take a trip down memory lane, each of them reliving their previous elimination on the big screen. It’s actually quite emotional for some of them and humorous for others. But it’s time to show the judges how far they’ve come. Whoever wins the challenge receives an immunity pin to keep them safe for the next one. The clock starts ticking and it’s fun to watch these returning cooks continue to pursue their dreams.

8:20 p.m. — Tommy continues to be the biggest personality of the bunch, as he was his previous season. He’s running back and forth between his station and the pantry, continuing to forget ingredients. He’s freaking out a little bit and seems completely scattered. The Season 9 rivalry between Emily and Shanika continues as they prepare their dishes side-by-side. Honestly, I feel like Gordon is trying to force this rivalry. Each of these women have 19 people to worry about, not just each other. Gabriel feels a little more pressure on his shoulders because Gordon personally financed his dream of going to culinary school. Will he prove Gordon’s money was well spent? At this point he’s struggling with the fresh-made pasta so he could be in jeopardy of going home first.

8:35 p.m. — Time has expired and all of the cooks have plated each dish. Some look more thrilled about their finished products than others. Stephen is especially disturbed by the fact that his panna cotta isn’t set. The judges circle the kitchen and seek out who has the best and worst looking dishes. Next, they announce which three cooks are the best of the night.

8:45 p.m. — Willie is called up first and serves the judges a Cajun Dumpling with Spicy Vegetable Broth. Gordon thinks it’s visually beautiful and he loves Willie’s confidence. It tastes delicious. Joe “really enjoyed” the flavorful dumpling. Next up is Emily with her Deconstructed Black Forest Gateau with Cherry-Vanilla Gel, Chocolate Bark and Chantilly Whipped Cream. Gordon calls it delicious. Aaron is blown away and loves the texture. The final dish in the top three is Shanika’s Egg Yolk Ravioli with Mushroom & Ricotta Filling and Brown Butter Sauce. Gordon says the dish “oozes confidence.” Joe says it looks perfect. After a quick deliberation, the judges announce the winner of this challenge is Emily! She wins the immunity pin for the next challenge.

8:55 p.m. — Now it’s time to look at the worst three dishes of the night. Gabriel is called forward to present his Sausage & Ricotta Cannelloni with Marinara Sauce and Mozzarella Topping. Joe says it looks simple and lacks finesse. Gordon says it just doesn’t taste very good. Aaron says Gabriel invested his time horribly. Next on the chopping block is Stephen with his Cacao Panna Cotta with Blackberry & Gin Sauce and Spicy Hazelnuts. It’s obvious that it isn’t set, but Gordon calls the flavor “rich and delicious.” Gordon says, “it’s just liquid.” Joe thinks it’s chocolate milk and it’s terrible. Last up is Tommy with his Beef & Chorizo Burgers with Fried Green Tomato and Avocado Truffle Mayo. Gordon says they look a mess! First of all, some of them are missing buns, others are missing bacon. Gordon likes the fried green tomato. Aaron says it was a misfire to put chorizo in the burger.

8:59 p.m. — The judges deliberate and come to a decision. The first returning cook eliminated from the competition is Stephen. It’s a tough pill for Stephen to swallow considering he never landed in the bottom three throughout the entirety of his previous season. He went from 3rd place to 20th. Next week the chef-testants will face the first mystery box of the season.