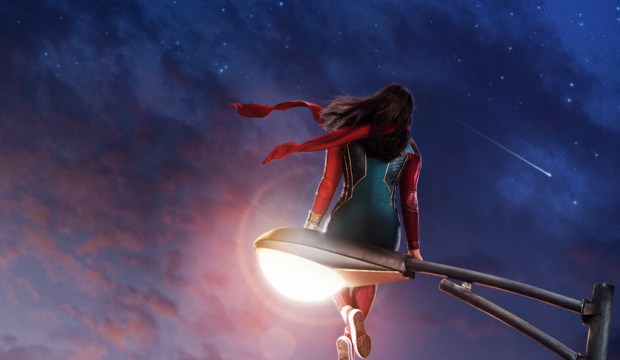 The future of the Marvel Cinematic Universe has stepped into the blinding lights. On Tuesday, Disney+ revealed the first trailer for the upcoming Marvel series “Ms. Marvel,” which introduces audiences to Iman Vellani as the title hero.

The trailer – which shows Vellani’s teen hero comes into her own with The Weeknd’s “Blinding Lights” on the soundtrack – offered a first look at the tone and style of the six-episode series, which comes from creator Bisha K. Ali and “Bad Boys For Life” directors Adil El Arbi and Bilall Fallah. In addition to Vellani, Aramis Knight, Saagar Shaikh, Rish Shah, Matt Lintz, Zenobia Shroff, and Mohan Kapur are among the stars.

Per Marvel’s website, “Ms. Marvel” “introduces Kamala Khan (Vellani), a Muslim American teenager growing up in Jersey City. An avid gamer and a voracious fan-fiction scribe, Kamala is a Super Hero mega-fan with an oversized imagination—particularly when it comes to Captain Marvel. Yet Kamala feels invisible both at home and at school—that is, until she gets super powers like the heroes she’s always looked up to.”

“Ms. Marvel” is scheduled to premiere on June 8, 2022, and will consist of six episodes. The show is the second MCU series to debut in 2022 following “Moon Knight,” which arrives on March 30.

All 19 Emmy nominations for the Marvel Cinematic Universe including 'Moon Knight,' Chadwick Boseman…

Why Marvel's lower Emmy nomination tally is still a win

'Thor: Love and Thunder' is the 26th best Marvel Cinematic Universe movie, according to this…

After 'WandaVision's' breakthrough, what are Marvel's Emmy chances in Year 2?