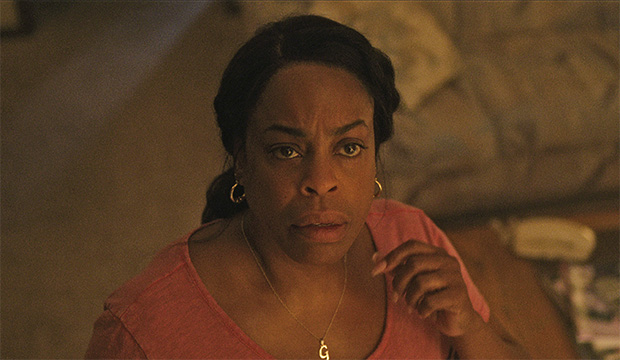 While Evan Peters is getting praised by critics and viewers (and deservedly so) for playing serial killer Jeffrey Dahmer on Netflix’s “Monster: The Jeffrey Dahmer Story,” I wanted to shine an awards spotlight on another cast member who gives the best performance of her career: Niecy Nash. The actress plays the true hero of the story, Glenda Cleveland, who is frequently ignored by the authorities when she alerts them about the frightening happenings in her neighbor’s apartment.

“Glenda was one of his victims, too, and her story has been told the least of these,” Nash declares in a Netflix interview (watch below). Glenda repeatedly complains about the foul odors coming from Dahmer’s apartment, and dials 9-1-1 multiple times after hearing screaming and drilling coming through the vent. Sadly, if the cops had listened to her from the get-go, many of Dahmer’s future victims would likely still be alive today.

In one of “Monster’s” most frustrating scenes, Glenda demands more to be done after a young boy escapes from Dahmer, but the police instead return the victim to the apartment of horrors, where he is later killed. Nash believes the authorities ignored Glenda for two reasons: “I think it was homophobia on one hand and not having that much respect for a Black woman on the other hand.”

The actress adds, “Heavy is the head that wears the crown to tell this story, specifically through Glenda’s lens as it had never been done before. So that comes with a lot of responsibility because you want to make sure you get it right.” Nash calls Glenda “a special woman” and notes how “she deserved way more than a little cheesy plaque in the bottom of a social hall somewhere.” Glenda Cleveland passed away in 2011.

SEEEvan Peters back in awards conversation for ‘terrifying transformation’ in Netflix’s ‘Monster: The Jeffrey Dahmer Story’

Nash currently places in the Top 3 of Gold Derby’s Golden Globe predictions for the newly created category of Best Limited/Movie Supporting Actress. Her biggest competition looks to be two co-stars from HBO’s “The White Lotus: Sicily,” Jennifer Coolidge and Aubrey Plaza. At the SAG Awards, Nash may have a tougher time as that organization combines lead and supporting performances together in the same category.