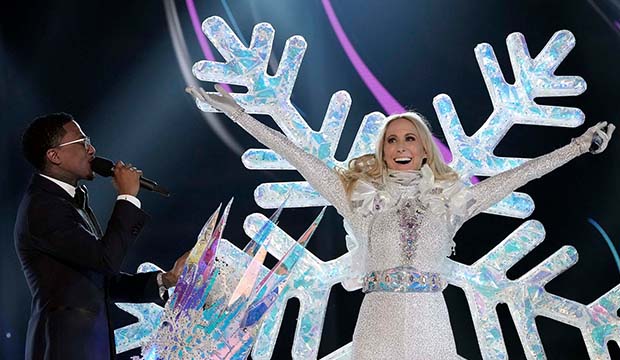 It was a “Battle of the Semi Finals” on “The Masked Singer” airing Thursday, November 24. Harp, Lambs and Snowstorm had each taken out the competition in their respective rounds and went head-to-head in the first ever three-way Battle Royale. After performing “Thinking of You” by Katy Perry and “Since U Been Gone” by Kelly Clarkson, it was Snowstorm that came up short of reaching the Season 8 finale, revealing herself to be comedian Nikki Glaser.

“It was the first dream that I ever had,” the actress told host Nick Cannon during her unmasked interview. “It was squashed at such a young age and it just became something that was unattainable to me. When this opportunity came up it was so perfect. I think what held me back is that everyone knew I was a comedian, so everyone was like, ‘Don’t sing, no one wants to hear that. It’s like Michael Jordan playing baseball. No one needs that from you. Do what you’re good at.’ This show really allowed me to forget all of the insecurities I had around singing and really explore my voice.”

Prior to the big reveal panelists Robin Thicke, Jenny McCarthy, Ken Jeong and Nicole Scherzinger each chimed in with their thoughts on who the Snowstorm could be. Jenny nailed it, guessing Glaser was the secret singer while Robin thought it was Whitney Cummings, Nicole guessed Iliza Shlesinger and Ken went with Kristen Wiig.

In her clue package she stated, “Ever since I was a little girl I always dreamed of being a pop star. When I was in high school I was taking voice lessons and one day my mom said she got a call from my voice teacher saying, ‘I’m sorry, but your daughter doesn’t have it.’ That was the day my dream died. That’s why I’m very thankful I’m still here on this show. I’m really grateful for the opportunity to express myself in a way I never thought I would be able to artistically. And I hope by making it to the finals next week I continue to inspire any kid or adult who thinks they don’t have it. I promise you, you do have it, you just gotta unmask it. If my voice teacher is out there watching, don’t change the channel. Because proving you wrong someday has kept me going all these years. So this one’s for you, dream killer!” In the video we saw a cinema ticket, hinting she’s an actress. We also saw a snow globe and a sign that says “Live.”