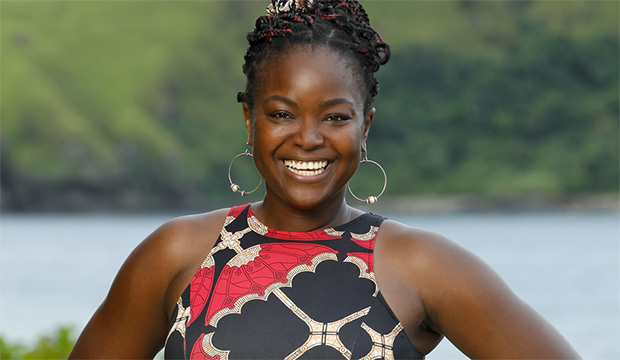 Nneka Ejere‘s game of personal connection and loyalty came to an emotional end on Wednesday’s third episode of “Survivor 43.” Despite being blindsided in “a really cool” way by her alliance, the 43-year-old remains positive leaving the island, saying, “I’m surprised I don’t have any negative emotions.” Read her “Survivor 43” exit interview below.

On last week’s second episode, Nneka was on the right side of the vote when her Vesi tribe attended their first Tribal Council. She, Cody Assenmacher and Jesse Lopez joined in a three vote majority over Noelle Lambert and Dwight Moore to take out their ally Justine Brennan. When Vesi lost the immunity challenge again this week, Cody, Jesse and Nneka were seemingly in the power position to have an easy majority over Noelle and Dwight. Their sights were set on Noelle based on Jesse and Nneka having a more trustworthy connection to Dwight.

But the age-old question of tribal strength vs. loyalty going forward came up for Cody and Jesse who saw Nneka as the weak link in the tribe. Nneka committed herself as the puzzle master of their tribe, but was unable to come through on the puzzle in the challenge (alongside Jesse) while Noelle proved her worth competing in the water portion of the challenge with only one leg and excelling; their different worth at challenges could not have been any more clear.

In the end, Cody and Jesse chose strength and joined Noelle and Dwight to blindside Nneka in a 4-1 vote. Nneka had already been emotional about the prospect of voting someone out because of her own failure, so it wasn’t a surprise when she took the blindside in stride. She said, “They pulled it off really well… I’m surprised I don’t have any negative emotions.”

Continuing, Nneka was appreciative of the short time she had in Fiji playing the game: “I’m grateful for the experiences here, relationships built, things that I did that I would never have done in my regular life and this has been a dream come true and I don’t regret this one bit. So I just want to say a big thank you. I’m grateful for this experience.”

Nneka’s departure leaves Vesi with four members who would seemingly split down the middle 2-2 if it came to another vote. Did Cody and Jesse leave themselves vulnerable by giving away an easy majority or have they put their tribe in a stronger position to win future challenges and avoid returning to the voting booth? Sound off about Nneka’s elimination and the future of Vesi in the comments and forum.