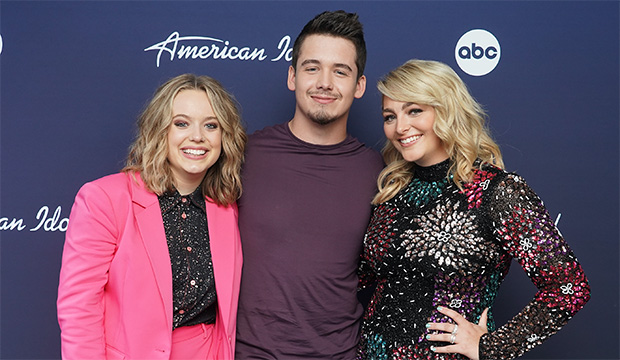 As predicted, the 20th season of “American Idol” ended with Noah Thompson winning the coveted title. The soft-spoken 22-year-old country singer from Kentucky beat out runner-up HunterGirl and third place finisher Leah Marlene during the three-hour season finale, which aired live coast-to-coast on Sunday, May 22 on ABC. He now becomes the reality TV show’s 20th overall champion — see the winners list. If you missed the star-studded episode, read our minute-by-minute live blog to see how Noah Thompson wins “American Idol” 2022. But did voters get it right? Vote in our poll below.

The night began with the Top 10 singers performing the tune “Good Feeling” with Flo Rida on a rooftop. Each of the three finalists then sang a Bruce Springsteen song and an original tune for America’s votes. Leah Marlene took on “Cover Me” and “Flowers,” HunterGirl belted out “Dancing in the Dark” and “Red Bird,” and Noah Thompson sang “I’m on Fire” and “One Day Tonight.”

Earth, Wind & Fire took the stage with Top 7 contestant Jay to a medley of some of their greatest hits: “Shining Star”, “Let’s Groove” and “September.” Then Deana Carter and Top 10 finisher Mike Parker sang a country duet of “Strawberry Wine.”

That’s when host Ryan Seacrest announced the first results of the evening. Based on America’s live votes, Leah finished the competition in third place. That meant “American Idol” had its first male country singer vs. female country singer face-off since Scotty McCreery and Lauren Alaina in Season 10.

With the air sucked out of the room due to Leah’s elimination, it was up to Ben Platt and Top 10 singer Lady K to bring up the energy with a cover of “Take Me to the Pilot.” They were followed by Gabby Barrett, Cade Foehner and Top 10 artist Emyrson Flora performing “Pick Me Up” and “The Good Ones.” Later, Tai Verdes sang “A-O-K” with various members of the Top 10.

Sara Bareilles joined Top 5 powerhouse Nicolina for a reprise of “She Used to Be Mine,” which Nicolina originally sang in her audition. Katy Perry was the first judge to perform in the grand finale, and she dueted with Thomas Rhett on his hit song “Where We Started.” Next up, James Arthur took the stage with Top 5 favorite Fritz Hager for a cover of “Can I Be Him.”

In a full-circle moment that was first teased when Christian Guardino was booted during Top 7 week, Michael Bublé joined his number one fan for a touching (literally) duet of “Smile.” Melissa Etheridge performed alongside Noah Thompson to the song “I’m the Only One.” Then it was judge Lionel Richie‘s turn to belt out his classic hit “You Are” with all of the Top 10.

Ben Platt and Sara Bareilles returned for their new collaboration “Grow as We Go,” along with the help of several of the season’s finalists. Katy Perry and Leah Marlene sang “Firework” together, exactly 11 years after a kid version of Leah performed it at a talent show. Country fans swooned when Luke Bryan and HunterGirl took the stage together for a rendition of “I Told You So.”

Noah reprised his twangy version of Rihanna‘s “Stay” from the showstoppers round, and then HunterGirl showed how much she’s grown in the competition by crooning Rascal Flatts‘s “Riot.” Ryan Seacrest returned to the stage to make the big announcement. After 16 million votes, the winner of “American Idol” 2022 was … Noah Thompson! “My heart is beating out of my chest,” the soon-to-be superstar said at the end of the show. “This is crazy.”