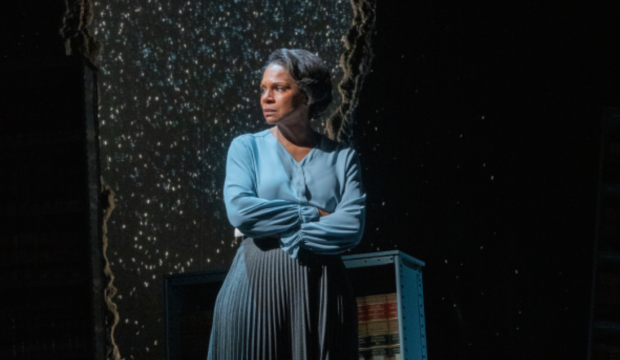 Fans of the extraordinary Audra McDonald have had a long wait for her return to the Broadway stage. Yes, she did host the 2021 Tony Awards that were previously postponed by the pandemic, and yes, she has been starring in “The Good Fight” with countless theatre alums, but nothing compares to seeing McDonald live. After three and a half years, the actress now leads the first production of an Adrienne Kennedy play on Broadway: “Ohio State Murders” opened at the newly-minted James Earl Jones Theatre on Dec. 8.

In “Ohio State Murders,” McDonald plays Suzanne Alexander, a writer who returns to her former college to deliver a lecture on her work. Through her narration, she reveals the racism she experienced as a young student, her relationship with a professor (played by Tony Award nominee Bryce Pinkham), and the murders of the play’s title that continue to haunt her and her writing. Tony winner Kenny Leon directs the production.

Critics offered effusive praise for the production’s star and an overall warm response to the show itself. Naveen Kumar (Variety) calls the play “a heady collision of memory and trauma.” He credits Leon’s direction for how he “presents a bold, and unmistakable, visual representation of Kennedy’s argument for literature and imagination as both proof of human horror and an essential escape from it.” Kumar raves about McDonald, “a meticulous cartographer of the heart and mind,” and her embodiment of Suzanne.

SEE ‘The Kite Runner’ closes on Broadway: Will this ‘heartbreaker’ of a play be remembered by Tonys?

A little less enamored, Gloria Oladipo (Guardian) rates the play three stars of five. She praises McDonald as “sublime, occupying the emotional state of Alexander’s present and past with no effort” and observing how her “body literally vibrates with rage” at moments in the play. “But despite her immense talents, even McDonald’s recreations of grief have a ceiling,” she writes, ultimately saying that “Kennedy’s tale of woe rarely moves beyond the outfacing recollections” of the character’s past and thus “stumbles” and “lacks a higher calling.”

Even though some critics were mixed on the production overall, they ran out of superlatives to describe McDonald’s performance, and she who looks likely to earn her 10th Tony nomination next year. The actress will claim a spot amongst competition that includes Tony nominee Danielle Brooks (“The Piano Lesson”), Katy Sullivan (“Cost of Living”), Oscar-winner Jessica Chastain (“A Doll’s House”), Emmy-winner Jodie Comer (“Prima Facie”), and Tony-nominees Laura Linney and Jessica Hecht (“Summer, 1976”). McDonald is the winningest performer in the history of the Tonys, with six victories for “Carousel,” “Master Class,” “Ragtime,” “A Raisin in the Sun,” “The Gershwins’ Porgy and Bess,” and “Lady Day At Emerson’s Bar & Grill.”

The production should not yet be entirely ruled out in the top category, though it will have a tougher time than its lead performer. Given Kennedy wrote “Ohio State Murders” over three decades ago and given its past off-Broadway production back in 2007, the show will likely be deemed eligible as a revival by Tony administrators. If so, it would join an impressive slate of productions: “Death of a Salesman,” “The Piano Lesson,” “Topdog / Underdog,” “Between Riverside and Crazy,” and “A Doll’s House.” A total of six confirmed revivals for the 2022-23 season means that the category will have four slots, a hard limit given the great response to so many of the works that have already opened. What could help push the show into the nominees’ circle in a competitive environment is the playwright herself, who is making her Broadway debut at 91. If the play is nominated for Best Revival, Kennedy would receive a bid, marking her (overdue) first.

While the reaction to this mounting of the play may keep director Kenny Leon from earning his fourth Tony nomination, he should feel confident in a bid for his other directorial effort this year on “Topdog / Underdog.” He previously won the award for his revival of “A Raisin in the Sun.”

There are also design elements of this production that could receive recognition, too. Audiences and reviewers have singled out the work of four-time Tony-nominated lighting designer Allen Lee Hughes, who helps seamlessly transition between the past and present of the play. The same goes for the sound design by Tony nominee Justin Ellington, which Kumar describes as “haunting,” and Tony winner Beowulf Boritt’s scenic design, which Kumar also applauds as “startlingly beautiful” if not “too on the nose.” And though not voluminous, one should not count out the work of two-time Tony-nominated costume designer Dede Ayite, either, who Brian Scott Lipton (CitiTourNY) singles out in his review.