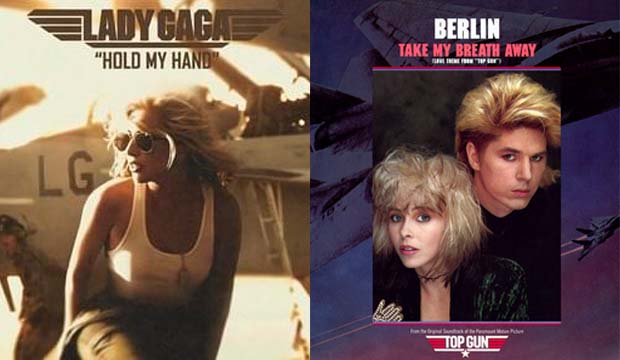 Lady Gaga is back in the Oscar race for “Hold My Hand,” a power ballad featured on the year’s biggest blockbuster “Top Gun: Maverick.” In addition to performing the track, the versatile entertainer co-wrote it with Michael Tucker, professionally known as BloodPop. An Academy Award nomination for Best Song would mark Gaga’s fourth bid. She was nominated in this category in 2016 for “Til’ It Happens to You” with Diane Warren (“The Hunting Ground”). Three years later she won the statuette for her song “Shallow” from “A Star is Born,” sharing the prize with Mark Ronson, Anthony Rossomando and Andrew Wyatt. The singer earned an additional Best Actress bid that year for her starring role opposite Bradley Cooper.

The movie’s predecessor from 1986 also starred Tom Cruise and became that year’s top grossing film. The #1 smash hit from the soundtrack, “Take My Breath Away” by Berlin, earned songwriters Giorgio Moroder and Tom Whitlock an Oscar for Best Song. That year’s lineup included “Glory of Love” from “The Karate Kid Part II,” “Life in a Looking Glass” from “That’s Life!,” “Mean Green Mother from Outer Space” from “Little Shop of Horrors,” and “Somewhere Out There” from “An American Tale.” Watch Bernadette Peters present that year’s Academy Award below.

Now Gaga is poised to follow in their footsteps. “Hold My Hand” currently ranks third in our combined Oscar odds for Best Song, projected to be among this year’s nominees. It has already earned nominations from the Critics Choice Awards, Golden Globes and Society of Composers & Lyricists. It has an additional bid at the Grammys for Best Song Written for Visual Media.

SEE Claudio Miranda (‘Top Gun: Maverick’ cinematographer) on the breathtaking in-camera flight sequences: ‘I didn’t want to be on a volume or on a blue screen’ [Exclusive Video Interview]

The precursor awards could be telling for Gaga’s chances. In 1987 “Take My Breath Away” won the Golden Globe on its way to Oscar, defeating three of its rivals (“Mean Green Mother from Outer Space” didn’t make the cut). The Golden Globes don’t always line up with the Oscars, but since Critics Choice began handing out their own Best Song prizes in 1998 there have been just eight instances where the Oscar’s Best Song winner failed to take one of those two precursors, and only one in the last 10 years.