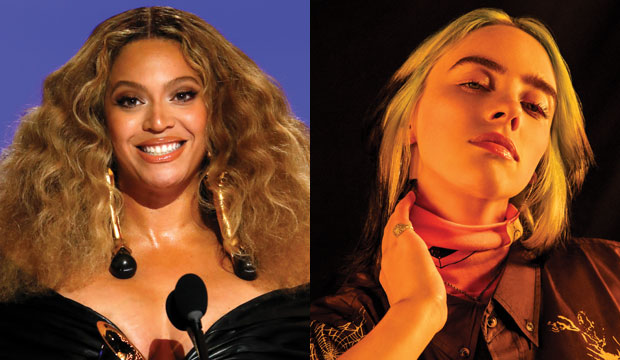 Beyonce and Billie Eilish have competed against each other for awards before, but usually at the Grammys. This year, however, both singer-songwriters are poised to be nominated for Best Original Song at the Oscars, and the Expert journalists we’ve surveyed thus far are split right down the middle as to which of them will win.

Eilish is actually a year overdue for her Oscar nomination. She and her brother Finneas co-wrote the title song from the latest James Bond film, “No Time to Die,” which was supposed to be released in 2020 but was delayed repeatedly due to the COVID-19 pandemic. In fact, the song itself was released as a single way back in February 2020 and this past year it already won the Grammy for Best Song Written for Visual Media. But it couldn’t compete for Oscar until the release of the film. The good news for Eilish is that the last two Bond themes — Adele‘s “Skyfall” from the film of the same name, Sam Smith‘s “The Writing’s on the Wall” from “Spectre” — both won the Oscar.

Meanwhile, Beyonce has been on the hunt for an Oscar nomination for years. She co-wrote “Listen” from the movie adaptation of the musical “Dreamgirls,” which was nominated for an Oscar, but academy rules limiting the number of eligible songwriters disqualified her from recognition. She also co-wrote and performed “Spirit” from the photo-realistic remake of “The Lion King,” but that song was snubbed entirely. This year she’s vying for a nom for “Be Alive” from “King Richard,” and the fact that that film is a Best Picture contender doesn’t hurt her case.

“No Time to Die” and “Be Alive” are the top two contenders according to the combined predictions of thousands of Gold Derby users, but the Expert journalists are split down the middle, with seven betting on one and seven betting on the other. Do you agree with them that this is strictly a two-way race? The field of possible nominees also includes songs by Ariana Grande, Jay-Z, Lin-Manuel Miranda, and Jennifer Hudson, among others. So they may not be the only music superstars in the running.