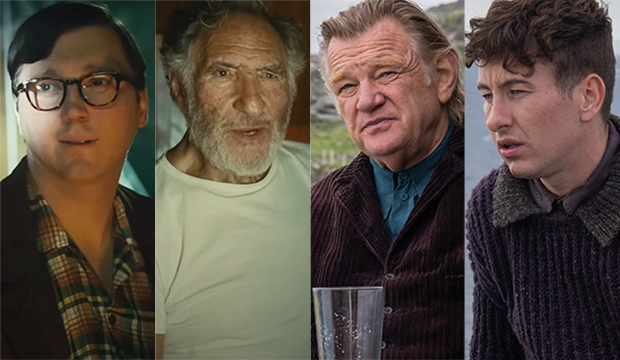 Ever since “Three Billboards Outside Ebbing, Missouri” (2017) ended a 26-year drought, double Best Supporting Actor Oscar nominees from one film have been all the rage. And this season, the category could very well tread new territory with a double set of double nominees.

“The Fabelmans” and “The Banshees of Inisherin” are both vying to field two supporting actor nominees — Paul Dano and Judd Hirsch for the former, and Brendan Gleeson and Barry Keoghan for the latter. Three of them are in the current top five in the odds and all four are in the top six. Ke Huy Quan (“Everything Everywhere All at Once”) leads the way in first place, followed by Gleeson, Ben Whishaw (“Women Talking”), Dano, Hirsch and Keoghan.

Should all four get in, this would be the second time in Oscar history in which two films score double nominations in the same acting category and the first time in supporting actor. The only time this has ever happened was in Best Supporting Actress, the friendliest category to double noms, 73 years ago. Celeste Holm and Elsa Lanchester from “Come to the Stable” and “Pinky” duo Ethel Barrymore and Ethel Waters took up 80 percent of the category, and they all lost to Mercedes McCambridge (“All the King’s Men”).

SEE Judd Hirsch and 10 other actors getting Oscar buzz for short, scene-stealing performances

At the moment, Gleeson, who has yet to be nominated for an Oscar, feels the safest for a nom of the four. He’s been solidly in second place ever since it was confirmed in September that he and Colin Farrell would campaign in different categories for their second Martin McDonagh collaboration, which centers on the deterioration of a lifelong friendship between the pair. Keoghan, who plays sympathetic local simpleton Dominic, rose up to sixth place following “Banshees'” release in October.

Even though “The Fabelmans” is the Best Picture favorite, neither Dano nor Hirsch feels like a lock right now. As the onscreen version of Steven Spielberg‘s dad, an even-keeled computer engineer, Dano has way more screen time and delivers a moving, non-flashy performance amid several flashy ones. Hirsch’s turn as Uncle Boris, who blows into the family home for a quick overnight visit, is the opposite. The 87-year-old makes the most of his limited time with a rousing, scene-stealing monologue. Is that one scene, along with his veteran status, enough to snag him his second nomination after “Ordinary People” (1980)? Dano arguably has the edge over Hirsch, but “The Fabelmans'” position as a top Best Picture contender could get both in.

If all four make the cut, a win for any of them would likely be difficult. There’s the double vote-split, of course, but Quan is already the front-runner, so him as the odd man out among double double nominees would be exactly what the doctor ordered. He’d be the McCambridge, who also hailed from the film that would go on to win Best Picture — something “Everything Everywhere” could definitely go on to claim.

PREDICTthe 2023 Oscar nominees by Jan. 24
Oscar odds for Best Supporting Actor
Who will be nominated?