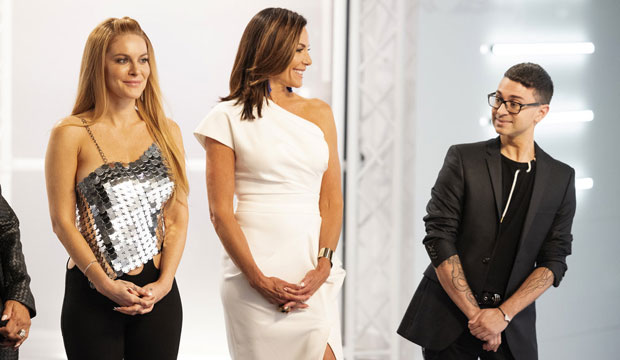 Last time, on the ninth episode of “Project Runway” season 19, Christian Siriano dropped the beloved “unconventional materials” challenge on the eight designers. Using any items they could find from a cocktail bar, the designers were asked to make a cocktail dress, but Prajje Oscar Jean-Baptiste‘s painted doily dress was not enough to score another date with the judges. They much preferred Shantall Lacayo‘s impressively-sewn  gown made entirely of black drinking straws and named her the week’s winner.

Below, read our “Project Runway” recap of season 19, episode 10, titled “The Housewives,” to find out what happened Thursday, January 6, when Andy Cohen served as guest to judge reunion gowns made for women from the “Real Housewives” franchise. Then be sure to sound off in the comments section about your favorite designers on Bravo’s reality TV show, who has the best aesthetic, and who you think will ultimately be crowned the next big name in fashion.

After consolidating their living quarters into one apartment, the final seven designers met back up with Christian at the catwalk for instructions on their “real client challenge.” Apples, oranges and flowers suggested that indeed those clients would be some fabulous ladies from three of “The Real Housewives” shows: Potomac, New York and Orange County. Christian explained that they’d be working with one wife to create the “ultimate reunion show look,” emphasizing meeting their particular needs and wants. As luck would have it, the pairings were decided by which vase (of apples, oranges, or flowers) the designers sat next to when entering the room: Bones with Shannon Storms Beador (OC), Shantall with Luann de Lesseps (NY), Anna with Gina Kirschenheiter (OC), Aaron with Gizelle Bryant (Potomac), Coral with Leah McSweeney (NY), Chasity with Karen Huger (Potomac), and Kristina with Dr. Wendy Osefo (Potomac).

To kick off their working relationships, the designers met with the wives for a 30 minute conversation before heading to Mood (sans Christian) for a $700 shopping trip. Super fan Chasity was doing her best to contain her excitement while Karen asked for a cinched waist because of her high comfort level showing off her hips and boobs. Wendy asked for similar, focused on showing off her own “new boobies and butt,” but added that she would be comfortable in anything, even a suit. Leah asked Coral for “sexy Disney princess,” Shannon explained to Bones that in the OC they have to wear short dresses and she must wear a bra, Luann requested “elegance” from Shantall, Gizelle and Aaron discussed doing a jumpsuit, and Gina gave Anna “edgy” as a starting point.

When it was time to start construction on the gowns, Chasity realized that she’d have to hand-sew the beaded fabric she purchased because removing beads frayed the fabric underneath, and it was impossible to sew with the machine with the beads intact. Meanwhile, Coral was going down the opposite path from what Leah requested, choosing to omit anything to do with ruffles and butterflies and even going with a different color. And speaking of color, while a handful of the designers were working with black fabrics, Aaron was using hot pink to help Gizelle achieve her Barbie fantasy. Black was one of the requirements Shannon gave Bones, but along with “above the knee” and “long sleeves” and “no sequins” he was feeling creatively stuffed into quite a small box.

During check-ins, Christian wanted to know from Chasity why she would choose black for Karen’s dress when the only colors she wouldn’t work with were brown and orange. He had to stress to her that she was showing something new and innovative, but she insisted that she should listen more to her client than to Christian. He was also concerned with Coral’s decision to completely ignore Leah’s wish for a bright color in favor of going with a nude tone after she had already omitted the butterflies and ruffles, which he agreed should have been nixed. He made Coral nervous by saying that she’ll have to convince Leah to wear the color that not many of the wives would be happy with.

At that point the women arrived for their fittings with the designers. While Karen was pleasantly surprised with Chasity’s choice of black (because she’s never worn it for a reunion before), Leah at first seemed discouraged by Coral’s vision, but was actually thrilled with the “epic” path she was going down. She told Coral that it looks “way better” than she could have envisioned herself. Overall, most of the women were excited by their first looks at the creations, but Dr. Wendy was not understanding Kristina’s vision of trousers under a dress. Wendy’s reaction contradicted the discussion they had during consultation where she explained she’d be okay with a suit and so Kristina became emotional out of frustration. Elsewhere, Gina was interested in the “warrior vibe” Anna had come up with, but the rest of the room including Christian were questioning the fit and why Gina wasn’t pushing Anna in a different direction.

Once makeup, hair and final fittings were done, the wives took to the catwalk for their elegant struts in front of Brandon Maxwell, Elaine Welteroth, Nina Garcia, and of course Andy. After what was one of the most thrilling and lively runways in series history, with the designers hooting and hollering in support of their clients, the judges’ scores decided the tops and the bottoms in the challenge, but they also wanted to hear from the women themselves to get their reactions.

Beginning with the NY wives, everyone agreed that Luann looked gorgeous, and she was just as happy with the look that Nina said had both power and femininity. Brandon said it was one of his highest scores ever and that Shantall created the perfect combination in the gown. With Leah, Andy was surprised because it wasn’t what he expected her to ask Coral for, but it still had a “hippie” fabric that felt very her. Nina and Brandon were not into the monochromatic and nude look, but Elaine found it “commanding.”

When it came to the OC ladies, Shannon and Bones expressed love for working with each other and the judges insisted that she looked fabulous head to toe. As for Anna’s dress for Gina, Nina thought it looked poorly made and Brandon called it “gothic,” confusing the judges across the board because it didn’t seem like either Anna or Gina got what they wanted out of it.

Concluding with the Potomac women, Elaine questioned the metallic pink fabric Kristina chose for Dr. Wendy because it looked dated, and Wendy expressed difficulty in the two of them reaching a compromise. Gizelle was highly complimentary of what Aaron did and the judges agreed, underscoring that the use of hot pink worked perfectly here. Karen was equally supportive of Chasity, and Andy picked up on how fresh of a dress it was for Karen specifically, but Nina found it to be rather basic actually.

In their private deliberations, the judges narrowed down the top two to Aaron and Shantall. Nina announced the winner as Shantall for making an elegant, intelligent and modern design, making her a champion two times in a row and for the third time overall. Andy added that it was perfect for Luann and perfect for a reunion show. The bottom three looks came from Anna, Kristina, and Chasity, but Chasity was given safety since she made her client so happy, though with a warning to push herself next time. Elaine called Anna and Kristina two of the strongest designers in the competition, but ultimately Anna’s look was not appropriate for a reunion show and was executed poorly so it was time for her to go.

NEXT TIME: The designers pair with an up-and-coming stylist to create a look based on the model’s hairstyle.