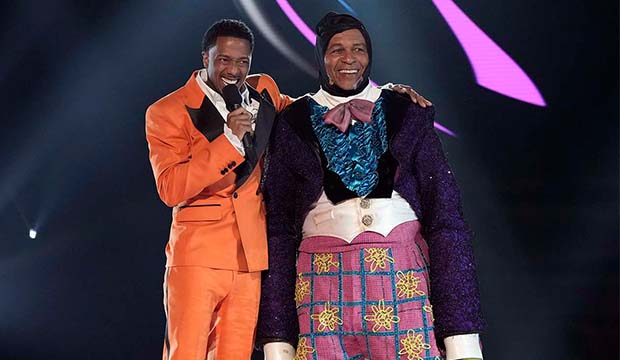 Two all new celebrities in disguise took to “The Masked Singer” stage for “Fright Night” on Wednesday, November 23, singing their hearts out and coming for Snowstorm’s crown. After giving a soulful rendition of  “Devil With the Blue Dress On” by Mitch Ryder & the Detroit Wheels, Sir Bug a Boo advanced to the evening’s Battle Royale, only to be bested by Snowstorm after singing “Somebody’s Watching Me” by Rockwell. The entire panel consisting of Robin Thicke, Jenny McCarthy, Ken Jeong and Nicole Scherzinger failed to correctly guess Grammy-winning swinger-songwriter Ray Parker Jr. was behind the mask.

“I saw it last year when y’all thought I was Bobby Brown,” Parker Jr. told Nick Cannon during his unmasked interview. “They put my head on the character and I was like, ‘What the heck is that?'” To his friends, family and fans watching at home, the accomplished musician said, “When y’all need somebody else to come on this show, and you need somebody extra, who you gonna call? Make me another costume and let’s do this!”

Prior to Parker Jr.’s reveal, the panelists submitted final guesses as to who they thought was hiding inside Sir Bug a Boo: Randy Jackson (Nicole), Keenan Ivory Wayans (Robin), Ernie Hudson (Jenny) and Jordan Peele (Ken).

In his clue package he stated, “It may be scary to you, but I’m used to spooky sounds. It started when I was thrown into a competition with the most monstrous names in the industry and was told that only one of us would get out with the job. I gave it my best effort, but never dreamed I would be the one they’d call. I’m sure glad they did because my work went on to earn a permanent place in pop culture. But I have a confession, the whole thing was a lie. I told the whole world that I wasn’t afraid of anything, even a scary movie. But I’m actually terrified of the dark. There’s no night light on ‘The Masked Singer,’ so tonight I’m putting that fear aside so I can smoke my competition.” Visual clues in Sir Bug a Boo’s package included a film reel, a hotel lobby with a bell and a red phone with “???” on it, a pen and paper and a ghost-like figure.