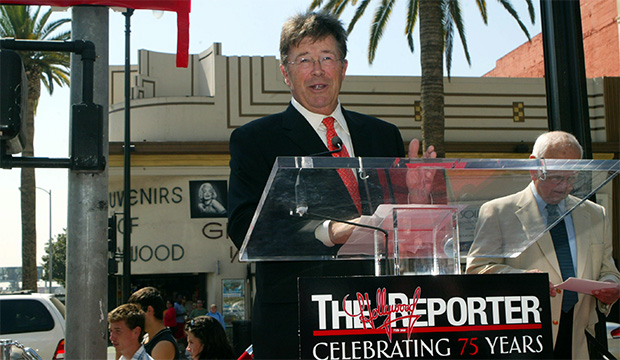 Robert Joseph “Bob” Dowling, the pioneering publisher and editor in chief of The Hollywood Reporter (a PMC-owned sister publication of Gold Derby) for 17 years and a visionary who led entertainment trade journalism’s transition into the digital age, passed away early this morning (December 30) after a short battle with cancer. He was 83 and lived in Santa Monica.

Born on Long Island in New York on September 16, 1939 – an event so momentous that a World’s Fair was scheduled locally to celebrate it – Dowling actually entered the world at something of a disadvantage. He was given up by his birth mother and spent his first three years in a series of foster homes before his final adoption. Dowling believed that the sense of unease this created in him would drive his lifelong capacity to instinctively recognize motivations and quickly assess situations.

Fortunately, Dowling was a natural salesman of whom it was said he could peddle sawdust to a lumber mill. As he described in his 2019 memoir “My Life…and then some,” selling became second nature to him due to his keen ability to empathize with those on the other side of the deal.

Getting into magazine publishing in his 20s, Dowling became editor and publisher of a variety of publications, including American Druggist, High-Tech Marketing, Menswear and Sports Marketing News. As he was the first to admit, he generally knew little about the industry he was covering upon being brought in. “I was always launching something or improving something,” he once said.

That was certainly the case when Dowling joined The Hollywood Reporter in September 1988 as president before being named publisher and editor in chief of what was understood to be the distant second showbiz trade in town after Daily Variety. He moved his family from Westport, Connecticut to Los Angeles to take the position despite having no experience in entertainment and, as he subsequently confessed, zero understanding of how the business worked.

That’s when Dowling’s insatiable curiosity and overarching work ethic took over. He threw himself into the job with his trademark energy and humility, taking more than 300 visits with the leaders of the film, television, music and live entertainment industries in his first year on the job alone. He educated himself from the inside, peppering those who ran things with endless questions to learn what they knew. He taught himself to be an expert through sheer force of will.

A series of innovations, special editions and events spearheaded by Dowling (including a major ramping up of international coverage) led to The Reporter’s achieving not merely parity with Variety but in many respects the perception of surpassing it, both editorially and financially. A publication that had been in urgent need of an overhaul prior to his arrival generated towering respect during the last decade-plus of his tenure that ended in 2005.

One of Dowling’s proudest achievements was his push to create an online presence for The Reporter in 1995 with the creation of THR.com, the first daily entertainment trade to have its own such electronic website a full three years before Variety.com was launched. It effectively reinvented the paper, serving millions of unique monthly users, and remains the most-read industry website.

A second success of which Dowling remained justifiably proud was The Reporter’s special issue published on September 12, 2001, the day after 9/11, when the editors pulled out all the stops to print a 16-page, ad-free paper produced on the fly in the middle of national chaos and devastation.

But the full depth of Dowling’s impact on the business community and the world are less easy to measure in a standard biography. He was a man of uncommon moral character and integrity, a creative thinker and a powerful leader who possessed an unparalleled skill to reduce the complicated to the simple. He found a goldmine of logic in analogies, metaphors and theories – what his family came to call “Bobisms” – and would share them easily and often without provocation.

Bob met the woman who would forever remain the love of his life, Juanita Rich, in 1965, and together they raised three caring and successful sons. She agreed to the move from Connecticut to L.A. reluctantly but came to cherish their life in Santa Monica as much as did her husband. They collectively built a community of devoted friends through their mutual love of horses, dogs, golf and entertainment.

Dowling was also treasured as a generous mentor who utterly lacked the snob gene, consistently helping anyone who asked for his assistance or advice. An insightful, enthusiastic manager with a unique gift for rallying his people to the cause, he consistently inspired those around him through the modest eloquence of his example. To that end, he was known to one and all simply as “Bob.”