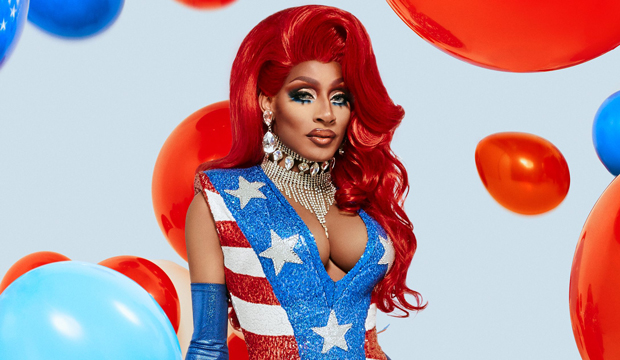 Before they walk into the Werk Room again, we’re taking a look back at each of the eight queens and the path they took on their previous seasons to reach their their crowning moment. Forced to perform for her finale from home at the start of the 2020 pandemic, Jaida Essence Hall stole the hearts of the audience in the most unexpected of ways, and quite literally snatching the crown from two beloved fellow finalists.

If you “look over there,” you’re likely to see Jaida serving true pageant elegance as one of the most classic drag queens to ever win the show. Her composure and grace on the runway made Jaida a strong force throughout season 12 and is a large reason why she escaped falling to the bottom all the way until episode 11. In that episode, Jaida reenacted a personal story of hers in the one woman show challenge, displaying an uncharacteristic insecurity on stage, but reclaimed that power in a strong lip sync to “1999” against Heidi N Closet.

Objectively speaking, the moment that Jaida broke out as a true contender for the win was in episode 9 when she coined her iconic phrase “Look over there!” during the “Choices 2020” presidential debate. It was in that challenge that she transformed from pure and consistently elegant queen to a performer capable to making the most bizarre moments incredibly funny. By the end of her season, Jaida was a more versatile and capable competitor on the show, so there’s no telling what tricks she may have up her sleeve to reveal as new talents on a new season. Look out! Coz here she comes.

Do YOU think Jaida has what it takes to win a second crown? Sound off on the upcoming season in the comments below and with other fans in our reality TV forum. Also be sure to make your predictions to influence our reality TV racetrack odds.