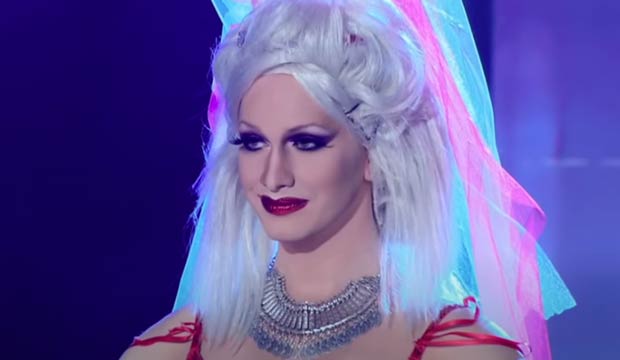 Before they walk into the Werk Room again, we’re taking a look back at each of the eight queens and the path they took on their previous seasons to reach their their crowning moment. To obtain the crown on season 5, Jinkx Monsoon overcame perhaps the biggest alliance in series herstory in Alaska, Roxxxy Andrews and Detox and remains the ultimate underdog winner.

Like “water off a duck’s back,” Jinkx managed to defy the odds and expectations with her season 5 win by exceeding the expectations of her competitors and a less-than-stellar track record. Among her only two maxi challenge wins was one of the most legendary “Snatch Game” impersonations of all time in her Little Edie. And yet despite only winning twice, Jinkx holds the record for the most consecutive episodes placing in the top at eight. That positioned her as a formidable opponent to the other finalists despite the official track record not putting her at the top, and could explain why they spent so much time dismissing her.

The one time Jinkx fell into the bottom (episode 11), she used to her advantage — showing Ru, the rest of the judges, and the other queens that she can also dance! Her lip sync to “Malambo No. 1” played to her strengths as a classic drag performer. She was able to incorporate a comedic schtick with her appreciation for stage performance and the operatic moments were true to an old Hollywood point of view. Overall, Jinkx made the most of being the odd girl out for an entire season, proving the weight that Uniqueness holds next to Charisma, Nerve and Talent on the scale.

Do YOU think Jinkx has what it takes to win a second crown? Sound off on the upcoming season in the comments below and with other fans in our reality TV forum. Also be sure to make your predictions to influence our reality TV racetrack odds.