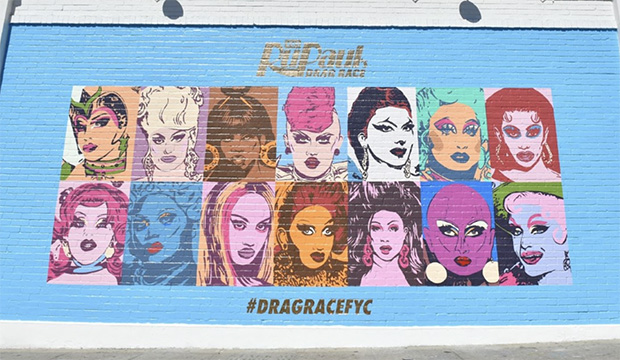 On Wednesday, August 10, in partnership with the Carrera Cafe in Los Angeles, queens from season 14 of VH1’s “RuPaul’s Drag Race” unveiled a sickening FYC Mural to celebrate their show’s eight Emmy nominations and the three additional bids for sister series “Untucked,” “All Stars” and “Whatcha Packin’ with Michelle Visage.” Lady Camden, Bosco, Kerri Colby, June Jambalaya, Jasmine Kennedie and DeJa Skye were all in attendance and, following the unveiling, volunteered at the LA LGBT Center in Hollywood by filling food delivery boxes for community families.

The mural is displayed on the outer wall of the Melrose Avenue cafe that will also have special “Drag Race” coffee topper promotions and limited edition coffee cup sleeves as part of the month-long celebration. Depictions of the queens’ faces make up the image of the mural and so naturally they each posed for photo ops there before sipping down a latte that featured their faces printed in the latte foam.

Fans can upload a photo, story or reel to Instagram using the hashtag #DragRaceFYCMural and tag @RuPaulsDragRace and @lalgbtcenter. For each post with the hashtag and tags, VH1 will make a donation to the Los Angeles LGBT Center.

This could be a historic year for “RuPaul’s Drag Race” at the Emmys with the chance to enter the Top 5 most Emmy-winning shows of all time. If the series wins six of its eight bids then “Drag Race” will reach 30 lifetime Emmy wins, surpassing “The Carol Burnett Show,” “Cheers,” “Hill Street Blues,” “The Mary Tyler Moore Show” and “Wings” to become the fifth most Emmy-winning program of all time.

“Drag Race” leads the 2022 Nonfiction/Reality Program pack with the most bids for any single program in its category. Among those are nominations for Casting, Directing, Production Design, Cinematography, Picture Editing and Sound Mixing, as well as, of course, Competition Program and Host, the latter of which RuPaul Charles has won six consecutive times.

Beyond its own eight nominations, the “Drag Race” universe of programs also earned three other bids. The popular companion show to the main program “Untucked!” was once again nominated for Unstructured Reality Program (it won in 2021) and the digital property “Whatcha Packin’ with Michelle Visage” earned its first ever nomination for Short Form Nonfiction or Reality Series. The third nomination in the family was also Paramount +’s first ever Emmy nomination for an Unscripted program with the “RuPaul’s Drag Race All Stars” nom in Picture Editing.