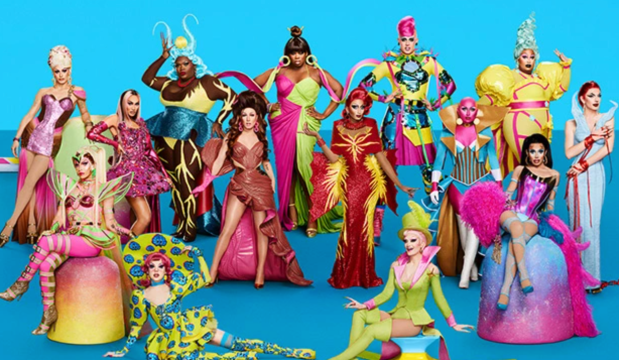 To test their charisma, nerve and talent, Ru asked the seven new queens to also showcase their own uniqueness in a talent show. Read below for our recap of episode 2 to find out which queen put the ‘U’ in the CNTs, and which queen met last week’s eliminated queen Orion Story on the bus home, in “Big Opening #2”:

The morning after Orion’s elimination, the new group of seven queens entered the Werk Room for their first time beginning with the self-described “Tex-Mex Latina showgirl” Jorgeous in a feathered red body suit. She was joined by DeJa Skye, a curvy “pastel princess” the embraces bold color, and Jasmine Kennedie, a pageant-like “ditzy doll” claiming to be a dancing queen. Next was Maddy Morphosis, the first cisgender heterosexual man on the show, in a simple Guy Fiery-inspired flame dress, followed by Angeria Paris VanMichaels, going by Angie, a Southern “glamorous country bumpkin,” Lady Camden, “America’s Spice Girl” from England but now living in Sacramento, and Daya Betty, a drag daughter of Crystal Methyd showing many family resemblances.

Shortly after making their own entrances, the queens met RuPaul Charles for the first time when he entered to introduce them to the competition and take them to the studio with photographer Albert Sanchez for a shoot with a huge bowl of orange TicTacs. After directing them through the process, Ru selected Angie as the winner of the $5,000 cash prize, but it was Maddy that found Santino Rice‘s buried hat in the bowl (a prize in and of itself). Then, Ru presented them with their maxi challenge: performing in the CNTs talent show to make a first impression with the judges and put their drag personality on display.

To help set them on the right trajectory, Ru rejoined the girls later to discuss their plans for the talent show and to get to know a little more about them. Ru’s biggest concern was with Daya whose talent of lipsyncing to the Pink song “Get the Party Started” seemed unlikely to show enough, or any, of Daya’s own unique perspective. As we already knew, Ru is not a fan of the ballet, but that wasn’t going to stop Camden from showing her strength as a trained dancer with a modified ballet performance. On the positive side, Ru seemed immediately taken with Angie’s charming personality and the way DeJa reminds him of old school drag aesthetics. While talking to Maddy, Ru also broke the news publicly that she’s the first straight contestant on the show, a fact that she hadn’t yet told any of the other girls in the room.

The next morning, the girls circled in to ask Maddy about her experience as a straight drag queen. Maddy explained that she doesn’t “lead” with that because she prefers to be defined within the art by the art, leaving sexuality out of it. Despite Maddy being cautious about how it’d be received, the other queens were highly supportive and agreed that toxic masculinity is the biggest reason that would prevent straight men from entertaining the idea of drag. While they discussed this and other things in the mirror, this week’s special guest judge Alicia Keys surprised them by showing face from the other side of it. Through the two-way mirror Alicia dropped words of support and gave them a last-minute boost of confidence before they hit the main stage for their first time.

On the main stage, Ru and Alicia were joined by series judges Michelle Visage and Carson Kressley for the talent show and a runway in the . Jorgeous opened the talent show with a lipsync to Dua Lipa in a fringe bikini doing death drops and splits all over the stage. Jasmine went down the same path with a lipsync/dance to Fifth Harmony doing equally impressive tricks and flips. Daya took the stage as the third lipsync in a row, sticking with the Pink song and dressed in a circus ringleader outfit, but without the dance elements it was a drop in energy from the previous two. Camden’s ballet number was less boring than Ru would have expected because of the uptempo song and that she performed it in heels rather than flats. DeJa’s cheerleader comedy skit was a change in pace from the previous four, but when it became apparent that the cheer tricks she was teaching were a joke not a talent, it all fell a bit flat. Maddy came to the stage with an electric guitar that she actually played (unlike Alyssa last week) and even with her tongue (!!), but the slow blues song failed to bring the energy in the room up. Angie closed by lipsyncing to her own original song, an uptempo track that when paired with her dancing finally raised the bar.

Following the talent show the girls walked the runway in the “Sickening Signature Drag” category. Jorgeous opened in an asymmetrical purple gown that she tore off to reveal the stoned mesh catsuit underneath. DeJa arrived in a black lace and blue fabric gown, Jasmine entered in a draped golden dress showing off her body. Maddy gagged with a Marie Antoinette costume that required her to bend forward under a gown so that it looked like she was walking with her severed head in her hands. Angie wore a beautiful burgundy pageant gown, Camden went more fun with a peacock-inspired club kid look, and Daya closed in a ribbon-laced dress that had accidentally split in the back.

In judges’ critiques, Jorgeous earned praise for her beautiful runway look and the high level of energy she brought as a performer in her dance routine. Carson loved DeJa’s runway look, but across the board she took a hit for delivering a comedy skit that wasn’t that funny. The judges were impressed with both of Jasmine’s presentations, blowing their minds by her dance tricks and the perfection in her runway look. Maddy succeeded in the creativity and talent areas, but the judges thought she could work on finding ways to raise the performance quality of her presentations. Alicia gave Angie high praise for doing an original song and Ru loved her runway look. Camden got points for pushing the boundaries in both the talent and runway shows, especially for putting her personality front and center. Michelle called Daya’s talent lackluster and Ru thought that there wasn’t enough of her unique personality on display.

Based on their deliberations, Ru gave safety to Jasmine, Camden and Jorgeous, leaving Angie as the winner (check!) of the challenge. DeJa, Maddy and Daya were the three bottom performers of the week, but Maddy was saved. As the bottom two, DeJa and Daya lipsynced to Alicia’s “Fallin'” as the last chance to save themselves from elimination. The love ballad inspired passionate, emotional performances from the queens, but Daya’s over-emphasis in her arm movements felt disconnected from the song while DeJa grooved to the music in a way that made sense with the lyrics. Here, Ru’s decision was that DeJa would remain in the competition, calling her a lipsync assassin, and Daya was the one to “sashay away.”

NEXT WEEK: The first six meet the second six for two balls, but Ru is already ready to throw a shocking wrench into the competition.