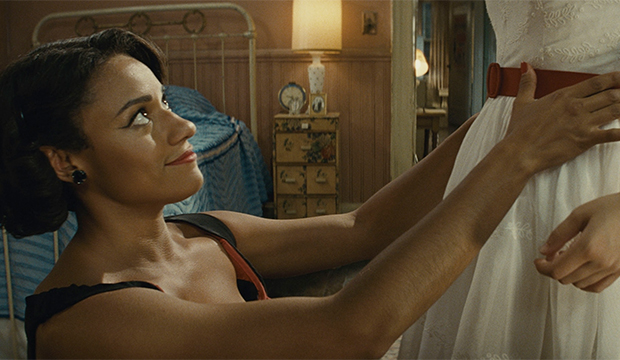 Ariana DeBose is one of the biggest breakout stars of this awards season thanks to her performance in Steven Spielberg’s “West Side Story.” The actress has scored nominations left and right for the musical, and she’s hoping that the Screen Actors Guild Awards will mark her first televised victory.

DeBose is a first-time SAG Award nominee. After working in the theater world for years, she piqued audiences’ interests when she was featured as “The Bullet” in the Broadway sensation “Hamilton.” She followed up that performance by embodying disco icon Donna Summer in “Summer,” which led to a Tony nomination. Hollywood scooped her up thereafter, and DeBose showed off impressive vocals in “The Prom” before nabbing the coveted role of Anita in this “West Side Story” adaptation.

DeBose has plenty of opportunities in the film to showcase her range of talents. She leads one of the musical’s biggest crowd-pleasers, “America.” To watch her dance here (and in the iconic mambo during “The Dance at the Gym”) is to watch a force of nature. Her body is exacting and expressive as it cuts across the screen, flourishing her billowing yellow dress to Justin Peck’s energetic choreography. She’s a ball of attitude and fire. Towards the end of the story, she showcases a different kind of fire as she roars through the emotional “A Boy Like That” following the murder of her lover. DeBose creates a character that’s part firebrand, part nurturing guardian, and radiates sensuality.

These beloved numbers have turned the role of Anita into an awards magnet. Rita Moreno picked up the Best Supporting Actress Oscar for playing this role in the original film. They didn’t have SAG Awards back in 1961, but considering that the guild gave Moreno its lifetime achievement award in 2014, she probably would have been in play had it doled out trophies. On Broadway, Debbie Allen was Tony-nominated for the role in 1981 and Karen Olivo won the Tony in 2009. Anita is the perfect showcase for a triple threat like DeBose, and the love that audiences maintain for this character is a major asset for the actress in this race.

She does have some fierce competition standing in her way, however. DeBose is nominated alongside Caitriona Balfe (“Belfast”), Cate Blanchett (“Nightmare Alley”), Kirsten Dunst (“The Power of the Dog”) and Ruth Negga (“Passing”). Balfe and Negga are also first-time SAG nominees. Dunst has a previous SAG ensemble win for “Hidden Figures” (2016), though this year marks her first individual nomination. Blanchett has an impressive 17 nominations, winning three times: an ensemble win for “The Lord of the Rings: The Return of the King” (2003), and individual victories for “The Aviator” (2004) and “Blue Jasmine” (2013).

Though Blanchett’s history with this guild is impressive, DeBose stands a better chance at winning thanks to this category’s penchant for first-time nominees. Other women who have recently won on their first try are Mo’Nique (2009’s “Precious”), Octavia Spencer (2011’s “The Help”), Lupita Nyong’o (2013’s “12 Years a Slave”), Alicia Vikander (2015’s “The Danish Girl”) and last year’s champ Yuh-Jung Youn (2020’s “Minari”).

Of course, the person DeBose will be trying to emulate most with a win here is Jennifer Hudson. She triumphed for playing Effie White in “Dreamgirls” (2006) on her maiden trip to the SAG Awards. Hudson was another supporting player in a musical who delivered some killer songs that helped seal a win with voters. Coincidentally, Hudson is nominated again this year in the lead actress race for “Respect.” Perhaps this is a good omen for DeBose, who will hope the torch gets passed to her.