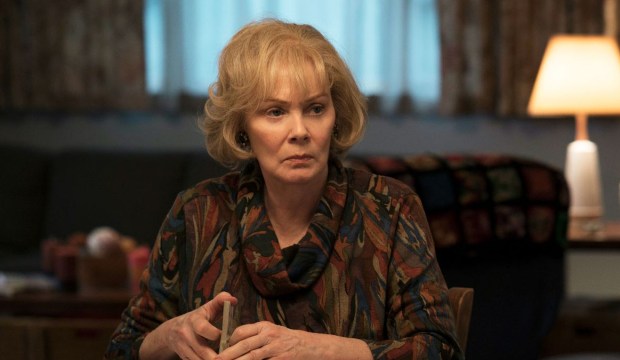 Last September, the limited series “Mare of Easttown” entered the 73rd Primetime Emmys ceremony with seven major nominations, including one for star Kate Winslet and three for supporting players Evan Peters, Julianne Nicholson, and Jean Smart. In the end, Nicholson triumphed over Smart and joined Winslet and Peters in the winners’ circle. Now, the Screen Actors Guild has given Smart another chance at victory by nominating her for the guild’s Best TV Movie/Mini Actress award. Nicholson is out of the picture in this case, but, since SAG does not separate lead and supporting TV performances, Smart now faces the challenge of defeating Winslet.

Aside from Winslet, Smart’s competitors in this category are Jennifer Coolidge (“The White Lotus”), Cynthia Erivo (“Genius: Aretha”), and Margaret Qualley (“Maid”). Coolidge is a total SAG newcomer, while Erivo and Qualley each have one 2020 film bid under their belts for “Harriet” (individual) and “Once Upon a Time in Hollywood” (ensemble), respectively. Winslet, who has a career total of 13 nominations, won this award for “Mildred Pierce” in 2012 and achieved victories for her supporting performances in the films “Sense and Sensibility” (1996) and “The Reader” (2009).

“Mare of Easttown,” which aired on HBO from April to May 2021, stars Winslet as titular Philadelphia detective Mare Sheehan, who is caught up in solving a series of seemingly related cases involving missing or murdered children. Smart plays the role of Sheehan’s mother, Helen Fahey, who lives with her daughter as the eldest member of a four-generation household. As Sheehan’s personal and professional troubles begin to weigh her down, her mother offers her own brand of advice, though it is rarely welcomed.

Smart is also up for this year’s comedy actress and ensemble prizes as the star of “Hacks.” Her portrayal of a Las Vegas stand-up comedian on that show brought her an Emmy win last fall. Her previous SAG history consists of a 2007 ensemble nomination for the drama series “24,” on which she played the fictional U.S. First Lady Martha Logan for a single season. She and her 10 costars were ultimately bested by the team from “Grey’s Anatomy.” Aside from its double actress mentions, “Mare of Easttown” received SAG bids for its stunt ensemble and for Peters’s individual performance.