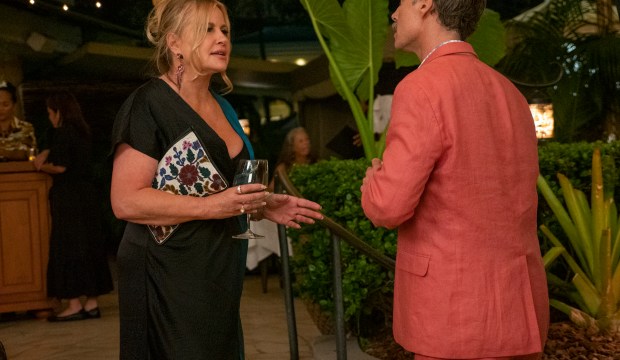 Wee-hee! Industry veteran Jennifer Coolidge has finally earned her first-ever nomination from the Screen Actors Guild Awards for her memorable performance in the HBO anthology series “The White Lotus.” Her humorous yet oddly poignant turn as Tanya McQuoid, a woman looking to spread her mother’s ashes while vacationing at a luxury resort, resulted in some of the best reviews of Coolidge’s career. Could this goodwill lead to a SAG victory on her maiden nomination?

If it does, it won’t necessarily be easy. Coolidge faces some stiff competition in her SAG category, Best Actress in a Television Movie or Limited Series, and she’ll face off against a mix of fellow first-time nominees and industry favorites. Also earning her first individual recognition this year is Margaret Qualley for the buzzy Netflix series “Maid.” Jean Smart is also here, but for HBO’s “Mare of Easttown.” Smart had only been honored by SAG as part of the cast of “24” in 2007. But this year, she doubled her individual recognition: in addition to her “Mare of Easttown” bid, she received a nomination in Best Actress in a Comedy Series for “Hacks.” (Smart was a three-time SAG Awards nominee in 2022, as she also landed an ensemble nomination for “Hacks” as well.) Cynthia Erivo is nominated for playing Aretha Franklin in Nat Geo’s “Genius: Aretha,” two years after earning her first SAG nomination on the film side for “Harriet.” Then there’s Kate Winslet for “Mare of Easttown,” who won an Emmy for her performance and towers over the competition with a whopping 12 nominations and three wins. The actress took home SAG statuettes for the films “Sense and Sensibility” in 1996 and “The Reader” in 2009 and the miniseries “Mildred Pierce” in 2012.

Still, for longtime fans of Coolidge, this recognition from her acting peers is overdue. The actress delivered a series of scene-stealing performances after the turn of the century in film series like “American Pie” and “Legally Blonde” and the various ensemble comedies by Christopher Guest, including “Best in Show” (2000), “A Mighty Wind” (2003), and “For My Consideration” (2006). She was a cast member on the CBS sitcom “2 Broke Girls” in the 2010s and took on supporting roles in recent films such as “Single All the Way,” “Like a Boss” and the heavily-awarded “Promising Young Woman.”

Though Coolidge has long excelled in laugh-out-loud comedy, most major award shows have failed to acknowledge her until now. What is significant about her performance in “The White Lotus” being recognized is in how it exemplifies her deft comedic timing while also delivering a more profound undercurrent of emotion than some viewers are used to seeing from the actress. Her Tanya is a woman lost in life, suffering from the loss of her mother and trying to find purpose again. Coolidge nimbly adapts to the show’s darkly comedic beats, making the most of uncomfortable pauses and strained conversations, all the while processing her grief. It is a testament to Coolidge’s carefully-crafted performance that she maintains the comic persona we all know and love and still manages to surprise audiences by providing depth to a character who would otherwise be treated as a joke. Perhaps SAG voters will recognize the hidden power in Coolidge’s performance and give the beloved character actress a win over Winslet, the Emmy-winning favorite.