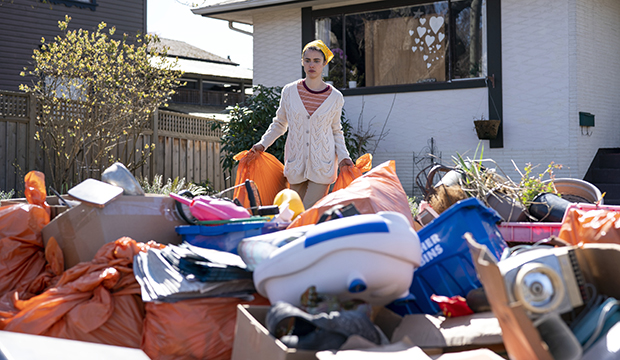 Margaret Qualley spent her youth training to be a ballerina before transitioning to acting in her mid-teens. That training likely aided her in her Emmy-nominated turn as the actress and dancer Ann Reinking in FX’s “Fosse/Verdon.” But it was her careful, layered performance as a single mother in Netflix’s critically acclaimed limited series “Maid” that earned the 27-year-old actress her first individual Screen Actors Guild Award nomination.

Based on the best-selling memoir “Maid: Hard Work, Low Pay, and a Mother’s Will to Survive” by Stephanie Land, “Maid” follows Qualley’s Alex, who turns to cleaning houses to make ends meet after escaping an emotionally abusive relationship with her child’s father. The 10-episode drama chronicles the all too fleeting highs and devastating lows of Alex’s attempts to build a life for herself and find a safe place to raise her daughter, all while trying to look out for her own mom (played by Qualley’s real-life mother, actress Andie MacDowell), who lives with undiagnosed bipolar disorder.

Although this is Qualley’s first individual SAG nod, it is her second nomination overall. She earned her first bid as part of the ensemble cast of Quentin Tarantino’s “Once Upon a Time in Hollywood” (2020). A win for “Maid” would do much to establish Qualley, whose previous TV credits also include HBO’s acclaimed drama “The Leftovers,” as a rising star in Hollywood, not to mention boost her chances of snagging the Emmy later this year.

Although she has been acting onscreen for nearly a decade now, she is still the newcomer in a race filled with veterans. Her competition for TV movie/limited series actress includes Kate Winslet (“Mare of Easttown”), who took home the Emmy last fall and is a Tony Award short of completing the EGOT. Including this year’s bid, she has been nominated a staggering 13 times by the Screen Actors Guild (winning thrice), beginning with her supporting turn in “Sense and Sensibility” (1995). Also nominated this year are Winslet’s co-star Jean Smart, Cynthia Erivo (“Genius: Aretha”), and Jennifer Coolidge (“The White Lotus”). This marks the first individual nominations for both Smart and Coolidge, and the second for Erivo, who was previously nominated on the film side for her performance in “Harriet” (2019).

Qualley might not yet have the accolades of Winslet or Erivo, and her résumé doesn’t yet rival that of Smart or Coolidge, but she’s done a lot in a relatively short amount of time to establish herself as an actress to watch. “Maid” rests squarely on her slim but talented shoulders, and she carries the series with astonishing ease. From the first episode, when Alex leaves in the middle of the night, to the closing moments of the finale, she is front and center, imbuing Alex with all the strength and determination of a mother desperate to keep her child safe and happy. Running below that fierceness, though, is a raw and palpable sense of anxiety: about money, about child care, about being trapped in a never-ending cycle of abuse and trauma.

Alex knows, based on experience, that her successes could be fleeting, that at any moment the things she’s worked so hard for could be ripped away. And yet, thanks to Qualley’s thoughtful and expressive performance, there’s also a sense of hope and optimism running beneath it all. Even though she faces a number of setbacks, she never gives up, and Qualley successfully conveys all of this in an understated but captivating performance that lingers long after the series is over. So while Winslet might have won the Emmy with her own fraught portrait of motherhood and emotional trauma, she’s got some serious competition in Qualley.

Lee You-mi ('Squid Game'): Ji-yeong is a fan-favorite because 'everyone wants and needs a person like…