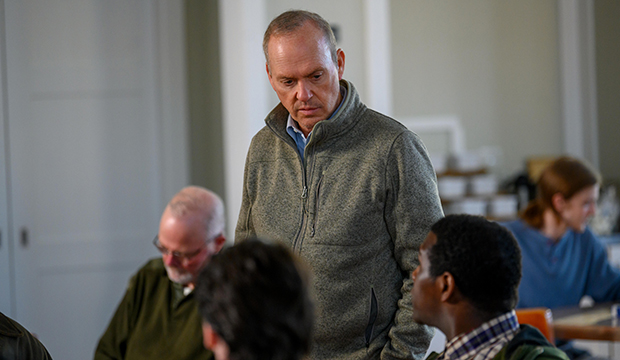 Michael Keaton might own the record for most film ensemble wins at the Screen Actors Guild Awards with three, but the once and future Batman is still looking for his first individual win across both film and television. It could come this year, though, as he’s been nominated for Best TV Movie/Limited Series Actor for his excellent turn as Dr. Samuel Finnix, a doctor in a Virginia mining town, in Hulu’s heartbreaking limited series “Dopesick.” The show, which was inspired by Beth Macy’s nonfiction book “Dopesick: Dealers, Doctors and the Drug Company That Addicted America,” tells the harrowing story of the opioid epidemic that crippled America, offering a raw but empathetic look at the men and women most affected by the crisis.

This is Keaton’s third individual nomination and second for TV. He was previously nominated in 2008 for his performance in the TNT miniseries “The Company.” On the film side, he earned a much-deserved bid in 2015 for his excellent turn as the lead in Alejandro G. Iñárritu’s “Birdman” (2014), though he lost to “The Theory of Everything” star Eddie Redmayne, who would go on to snag the Oscar as well. But while the loss stung, “Birdman” walked away the winner of the award for film ensemble, marking Keaton’s first win at the SAG Awards. He would soon follow it up with two more in the same category, first for “Spotlight” (2015) and then “The Trial of the Chicago 7” (2020), the latter of which etched his name in the history books.

An individual win for “Dopesick”’ would go far in cementing Keaton’s legacy as one of the most impressive actors working today. His competition in the race for TV movie/limited series actor is strong and includes recent Emmy winners Evan Peters of HBO’s “Mare of Easttown” (best supporting actor) and Ewan McGregor of Netflix’s “Halston” (best actor). Also nominated are Murray Bartlett of HBO’s “The White Lotus” and Oscar Isaac of HBO’s “Scenes from a Marriage.” This is the first nomination for Peters, Bartlett, and Isaac, while McGregor has been recognized four times including this year. He was previously nominated as part of the casts of the movies “Little  Voice” (1999), “Moulin Rouge” (2002), and “August: Osage County” (2014).

“Dopesick,” which documented the many crimes of Purdue Pharma—the manufacturer of the drug OxyContin—received rave reviews when it debuted on Hulu in October. Much of that praise was heaped upon Keaton’s shoulders for his layered performance as Dr. Finnix, a well-meaning and caring doctor who prescribes the pain-killing drugs to his patients believing that they’re not addictive. After a car accident, though, he is prescribed the drug himself and soon begins to suffer like his patients, adding yet another painful layer to the already difficult story while giving Keaton another opportunity to show off exactly what he can do. He both nails Finnix’s remorse in the role that he played in prescribing OxyContin as well as his descent into addiction.

Keaton long ago proved that he was more than just a comedic actor (or even the Caped Crusader), but his performance in “Dopesick” goes a long way to remind viewers of this. The same intensity that made him stand out in roles like Beetlejuice in the 1988 film of the same name or as the Vulture in “Spider-Man: Homecoming” (2017) is easily translated into more dramatic performances that stay with you long after they’re over. And while he’s facing off against two recent Emmy winners in Peters and McGregor at the upcoming SAG Awards, Keaton already triumphed over the latter in SAG precursors (Peters has been nominated as a supporting actor everywhere outside of the SAG Awards). It’s also important to remember that “Dopesick” wasn’t eligible during the last Emmys cycle. If it had been, who’s to say how things might have turned out?

Emmy nominee profile: Jane Lynch ('Only Murders in the Building') brings double the laughs as Steve…

Emmy nominee profile: Nathan Lane ('Only Murders in the Building') seeks to protect his son in 'The Boy…