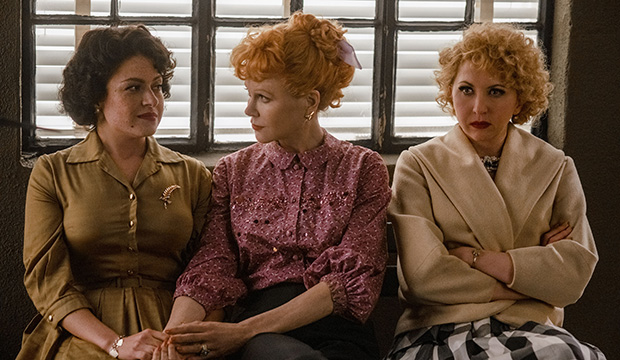 In an ironic twist, Nicole Kidman’s portrayal of TV icon Lucille Ball could lead to her first SAG Award win for film work. The celebrated actress has emerged as a frontrunner in a topsy turvy Lead Actress race this awards season, and the SAG Award might be her latest conquest.

Kidman is certainly no stranger to this awards ceremony. “Being the Ricardos” is her 15th SAG nomination. But it might shock you to learn that Kidman’s only win with the actor’s guild came from “Big Little Lies.” She’s earned individual nominations for the films “The Hours,” “Rabbit Hole,” “The Paperboy,” “Lion,” and “Bombshell,” as well as Ensemble bids for “Moulin Rouge!,” “The Hours,” “Nine,” and “Bombshell.” None of those acclaimed film roles yielded a victory.

SAG could finally endorse Kidman’s film career thanks to Lucille Ball. Aaron Sorkin’s biopic slips viewers behind the cameras to bear witness to a traumatic week in Ball’s life. The success she has amassed from “I Love Lucy” is on the brink of being scrubbed clean thanks to one fateful decision she made years ago: she checked “Communist Party” on her voter registration form in order to appease a relative. Amid the looming threat of career annihilation, Ball also has to contend with producers who refuse to allow her to appear pregnant on network television and she feels a growing suspicion that husband Desi Arnaz (Javier Bardem) is cheating on her.

Kidman is nominated in the Lead Actress category alongside Jessica Chastain (“The Eyes of Tammy Faye”), Olivia Colman (“The Lost Daughter”), Lady Gaga (“House of Gucci”), and Jennifer Hudson (“Respect”). Chastain was part of the winning Ensemble of “The Help,” while Colman has won Drama Ensemble for the Netflix series “The Crown” twice. Neither woman has yet to win an individual trophy. Hudson prevailed for bringing down the house in “Dreamgirls.” Lady Gaga is still searching for her first SAG win.

None of these actresses have the killer narrative which Kidman possesses. See, Kidman’s casting caused something of a social media meltdown. Cate Blanchett had originally been tied to the project, and audiences appeared eager to see her take on Lucy. When Kidman replaced Blanchett, who was forced to withdraw due to scheduling conflicts, Twitter exploded with harsh reactions. Whether it was industry wags, film nerds, or your crazy aunt from Boise, it seemed like everyone was whining and stomping their feet about how Kidman was all wrong for the part. What they failed to understand was that Sorkin had crafted a whirlwind behind-the-scenes drama, not a recreation of an “I Love Lucy” episode. Kidman’s transformational skills and dramatic chops had space to flourish as she crafted a portrait of Lucille Ball like we’ve never seen before. Critics adored the performance and nominations began flowing in.

This real world drama which Kidman was forced to endure is her secret weapon in the race. Actors hate being placed in a box, whether it’s by critics or Twitter. Now they have the chance to reward Kidman, giving a celebrated actress the last laugh when the internet decided to underestimate and belittle her abilities. Sounds like a Hollywood ending to me.