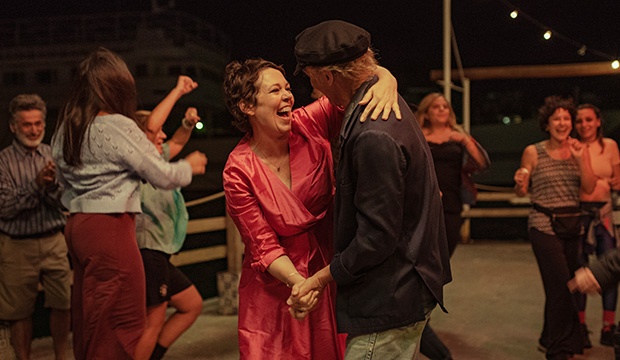 Olivia Colman has now racked up eight nominations from the Screen Actors Guild Awards over the course of only four years. She has taken home two awards, as part of the ensemble of “The Crown’s” third and fourth seasons, but she has surprisingly been a bridesmaid for all of her individual nominations. This may change at the upcoming SAG Awards thanks to her Best Actress nomination for “The Lost Daughter.” And she just might do it as the classic apple in a barrel of oranges.

The SAG Best Actress lineup outside of Colman is a celebration of the year’s top biopic performances. Nominees include Jessica Chastain as Tammy Faye Bakker in “The Eyes of Tammy Faye,” Lady Gaga as Patrizia Reggiani in “House of Gucci,” Jennifer Hudson as Aretha Franklin in “Respect” and Nicole Kidman as Lucille Ball in “Being the Ricardos.” Chastain is now at four SAG nominations and one win as part of the cast of “The Help” in 2012; Gaga is also a four-time nominee, earning a concurrent bid this year with the “House of Gucci” cast; Hudson won Best Supporting Actress for “Dreamgirls” in 2007 and was nominated with the film’s ensemble; Kidman is a 15-time nominee but with only one previous win, for “Big Little Lies” in 2018.

Meanwhile, the sheer performance of Colman at SAG over the last four years is something to behold. Her first nomination came in 2019 for “The Favourite,” for which she would eventually earn an Oscar. She earned three bids the very next year, including an individual nomination and a cast win for “The Crown” on top of another ensemble mention for “Fleabag.” She landed another three nominations in 2021, repeating those “Crown” nominations and wins in addition to an individual citation for “The Father.” Her performance in the fourth season of “The Crown” would eventually land her an Emmy.

Colman’s performance in “The Lost Daughter” as Leda, a woman still grappling with her decision to abandon her children years ago, is a testament to her range as an actress. While she embodies her character’s fierce independence, the strength of Colman’s turn is in the moments where the cracks start to form as she’s confronted with long-buried secrets. It is an internal performance but one that shows her ability to find humanity in even the most flawed characters. As the only actress playing a fictional character in the Best Actress lineup, she may benefit from voters wanting to reward Colman for creating a character of her own and proving that her skills exceed far beyond playing British royalty.