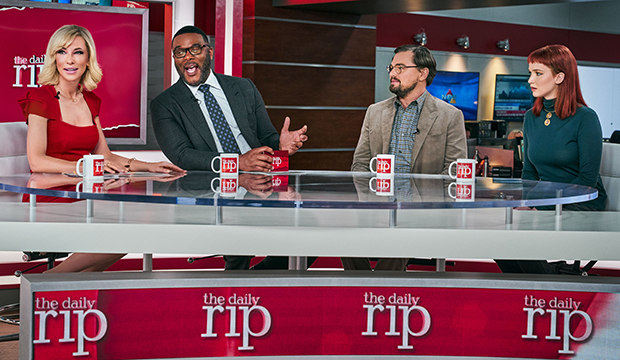 Bigger isn’t always better. But in the case of the ensemble film category at the Screen Actors Guild Awards, it’s easy to see why one might think that the larger the cast, the better chance a film has to win. After all, the math seems to be on its side, with more talent occupying the same amount of space. Plus, the movie with the largest cast has often walked away the night’s big winner. In the 26-year history of the award (it was added at the second ceremony), the movie with the largest cast has won 11 times. That’s 42 percent of the time, which gives us enough reason to ponder whether this year might be lucky number 12.

This year, the nominee with the largest cast is Adam McKay’s satirical film “Don’t Look Up.”

Now, SAG Awards rules stipulate that only actors with their own title card are eligible for the award, so while some movies feature larger ensembles than others, not every actor in a film is eligible to be included. The Netflix film features a total of 14 credited actors, including Cate Blanchett, who now holds the record for the most ensemble film nominations with seven. Her co-stars Leonardo DiCaprio and Meryl Streep both have six each. Also nominated for the movie are Timothée Chalamet, Ariana Grande, Jonah Hill, Jennifer Lawrence, Melanie Lynskey, Scott Mescudi, Rob Morgan, Himesh Patel, Ron Perlman, Tyler Perry and Mark Rylance.

According to Gold Derby’s combined odds, “Don’t Look Up,” which follows two astronomers attempting to warn the world about an approaching comet that will destroy all of humanity, is currently in third place with 39/10 odds and two Experts and three Editors predicting it to triumph. It trails “Belfast” (18/5 odds) and “CODA” (19/5 odds), with “House of Gucci” and “King Richard” are in fourth and fifth place, respectively, both with 9/2 odds. “House of Gucci” has seven credited cast members, while “Belfast,” “CODA” and “King Richard” each have six.

Of the five, “Don’t Look Up” also boasts the most A-list cast, which could work in its favor as well. However, it’s the only one of the quintet not to earn an individual acting nomination for any of its stars. But that didn’t stop “The Full Monty” (1997), “The Lord of the Rings: The Return of the King,” “Black Panther” or “Parasite” (2019) from winning the award.

Should “Don’t Look Up” eventually come out on top, it will be the second career ensemble film win for Blanchett (“The Lord of the Rings: The Return of the King”), Lawrence (“American Hustle”) and Rylance (“The Trial of the Chicago 7”).

SAG Awards odds for Best Film Ensemble
Who will win?