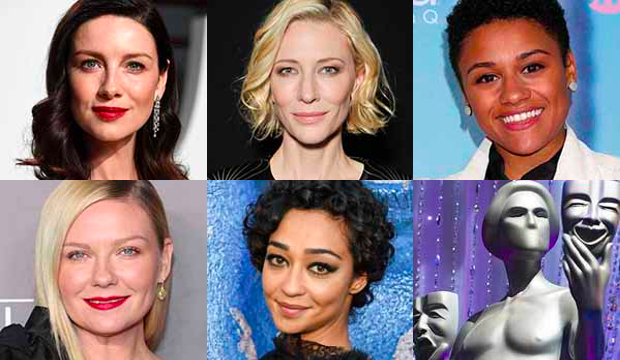 The outstanding female performance in a supporting role SAG nominees include such first-times in the category as Kirsten Dunst and Ariana DeBose, as well as a veteran SAG winner and nominee Cate Blanchett. Notably missing from the list are Rita Moreno for “West Side Story” and Ann Dowd for “Mass.”

Caitriona Balfe, “Belfast”
The 42-year-old Irish former model has won the hearts of critics as the loving, but no-nonsense Ma in Kenneth Branagh’s coming-of-age story. Balfe, who is best known for starring in the popular TV series “Outlander,” earned her first SAG nomination for her supporting performance.  Balfe won the Sunset Film Circle Award, was nominated for a British Independent Film Award and is contention at the Critics Choice Awards.

Cate Blanchett, “Nightmare Alley”
The two-time Oscar-winning actress (“The Aviator,” “Blue Jasmine”) earns her 14th SAG nomination for her performance as a beautiful but manipulate shrink in Guillermo Del Toro’s remake of the 1947 film classic. She is also nominated as part of the “Don’t Look Up” cast for her work as a slick, vapid TV journalist in the dark satire. The Australian actress, 52, previously won SAG honors for 2005’s “The Aviator” and 2013’s “Blue Jasmine” and as a cast member of 2003’s “The Lord of the Rings: The Return of the King.”

Ariana DeBose, “West Side Story”
The Tony Award-nominated actress, 29, who came to fame as “Disco Donna” Summer in 2018’s musical “Summer,” is vying for her first SAG award for her electrifying performance as Anita in Steven Spielberg’s lauded version of the 1957 Broadway and Oscar-winning 1961 film.  DeBose is following in the dance steps of Chita Rivera who played Anita on Broadway and Rita Moreno who won the supporting actress Academy Award for for the original film. Several critics groups named DeBose as Best Supporting Actress including the Los Angeles Film Critics Assn., Portland Film Critics Assn. and the Phoenix Film Critics Society. She’s also a Critics Choice nominee.

Kirsten Dunst, “The Power of the Dog”
The former child actress who came to fame at 12 in 1994 in the blockbuster “Interview with the Vampire,” earns her first solo SAG film nomination She plays as a widow with a teenage son who marries a gentlemanly rancher only to turn to alcoholic when she’s tormented by her ruthless brother-in-law. She previously shared in the cast award as part of 2016’s “Hidden Figures.” Dunst, 39, is nominated for a Critics Choice Award and was named Best Supporting Actress by the Atlanta Film Critics Circle and Phoenix Critics Circle.

Ruth Negga, “Passing”
A Best Actress Oscar nominee for 2016’s “Loving,” the 40-year-old Ethiopian native earns her first SAG film nomination for her haunting turn in the racial drama set in 1920s Harlem. Negga plays a light-skinned Black woman who “passes” as white. Negga has won plaudits from the National Society of Film Critics and Philadelphia Film Critics Circle. She was nominated for a Gotham Film Award and is vying for a Film Independent Spirit Award.

PREDICT the SAG Awards film winners; change them until February 27

Be sure to make your SAG Awards film winners predictions today so that Hollywood insiders can see how their films and performers are faring in our odds. You can keep changing your predictions as often as you like until just before the ceremony on February 27. And join in the fun debate over the 2020 SAG Awards taking place right now with Hollywood insiders in our film forums. Read more Gold Derby entertainment news.