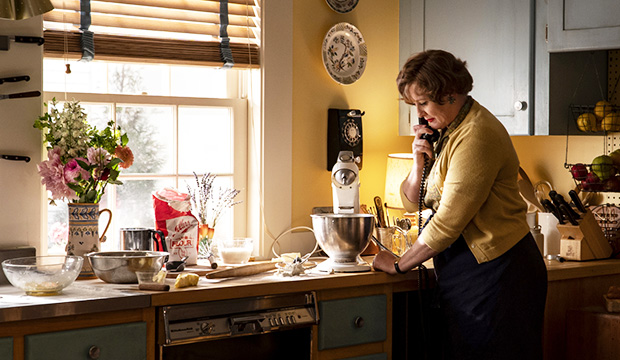 Fans of HBO Max’s “Julia” were boiling mad when the delicious series about the legendary Julia Child’s early days of television stardom failed to earn a single Emmy nomination over the summer. But with Golden Globes nominations less than a week away, some hope is beginning to simmer again for its captivating star Sarah Lancashire, who could rightly nab her first ever bid for her transformative and utterly charming performance.

According to our current combined odds, Lancashire will just make the cut in the TV comedy actress race, rounding out a category that we anticipate will feature returning champion Jean Smart (“Hacks”), Quinta Brunson (“Abbott Elementary”), Selena Gomez (“Only Murders in the Building”) and past winner Rachel Brosnahan (“The Marvelous Mrs. Maisel”).

Lancashire’s egregious Emmy snub notwithstanding, the Golden Globes have long loved to forge their own path with nominees and winners. In the past decade alone, the Hollywood Foreign Press Association has nominated actresses overlooked by other groups, including Zooey Deschanel (“New Girl”), Gina Rodriguez (“Jane the Virgin”), Rachel Bloom (“Crazy Ex-Girlfriend”), Frankie Shaw (“SMILF”), Kristen Bell (“The Good Place”), Kirsten Dunst (“On Becoming a God in Central Florida”) and Lily Collins (“Emily in Paris”). Remember six-time consecutive Emmy winner Julia Louis-Dreyfus (“Veep”)? The Globes never gave her a trophy for that role.

While that group of nominees may skew young — the HFPA often recognizes new talent in this category — voters have recently awarded overdue performers too. 2021 and 2022 saw both Catherine O’Hara (“Schitt’s Creek”) and Smart earn their first Globes nominations and victories. Tracee Ellis Ross similarly netted her first bid and win for “Black-ish” in 2017. Lancashire would fit in with this list of winners nicely.

The HFPA has already demonstrated its affinity for Julia Child, too. In 2010, the award for Best Film Comedy/Musical Actress went to Meryl Streep, who played the one-of-a-kind home cook in “Julie & Julia.” Lest anyone think any voters from back then might abstain from nominating Lancashire, her performance could not be any more different from that of the three-time Oscar winner’s. Rather than focus too much on mimicking Child’s well-documented mannerisms and voice or recreating Streep’s performance, she has instead created something all her own by uncannily tapping into and reflecting the icon’s ingenuity, wit, expert comedic timing, heart and heartbreak.

Though we don’t yet know how this (thankfully) expanded set of members will vote, it doesn’t hurt that Lancashire hails from the UK. The foreign press may seize the opportunity to shine a well-deserved spotlight on one of the stars of British television and the winner of two BAFTA Awards for “Last Tango in Halifax” and “Happy Valley.” They probably wouldn’t mind being able to beat the Emmys and Screen Actors Guild Awards to the punch by nominating (and potentially awarding) Lancashire before anybody else either.

Golden Globe odds for Best TV Comedy/Musical Actress
Who will be nominated?