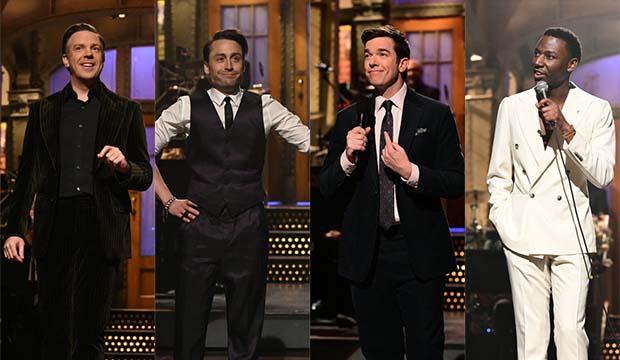 “Saturday Night Live” has become a dominant force in the Best Comedy Guest Actor race at the Emmys in recent years. That’s why it’s no surprise that four funnymen look poised to receive bids this year for their hosting duties based on our current odds. But can any of them take down the front-runner in this category?

Jason Sudeikis currently ranks second for his turn on “SNL” behind Nathan Lane for “Only Murders in the Building.” Sudeikis was a previous cast member of the sketch comedy series and has since won two Emmys for acting in and producing “Ted Lasso” on Apple TV+. Kieran Culkin sits in third place in our odds, followed by fellow hosts John Mulaney in fifth and Jerrod Carmichael in sixth. Bill Hader (“Curb Your Enthusiasm”) is in fourth. Will Forte was also submitted on the Emmy ballot for “SNL,” but is currently in 23rd place.

Justin Timberlake kicked off “SNL’s” trend of success as the first host to be nominated for Best Comedy Guest Actor in 2009. The Grammy-winning singer took home two Emmys that year, one for hosting and another for Best Original Music and Lyrics for “Dick in a Box” with Andy Samberg, Akiva Schaffer and Jorma Taccone. Timberlake won a second time for hosting in 2011 in a field that included another “SNL” host, Zach Galifianakis.

Lane currently leads our odds in this category for his role as Teddy Dimas on the Hulu comedy series “Only Murders in the Building.” The actor has lost all six of his previous bids for a Primetime Emmy, five of which were in this exact same category. His first was for “Frasier” (1995), followed by “Mad About You” (1998) and “Modern Family” (2011, 2013 and 2014). Lane’s sixth Primetime bid was for Guest Actor in a Drama Series for “The Good Wife” in 2013. Although Lane has been shut out at the Primetime Emmys so far, he’s won three Daytime Emmys for Best Performer in an Animated Program for three separate shows: “Timon and Pumbaa” in 1996, “George and Martha” in 2000 and “Teacher’s Pet” in 2001.