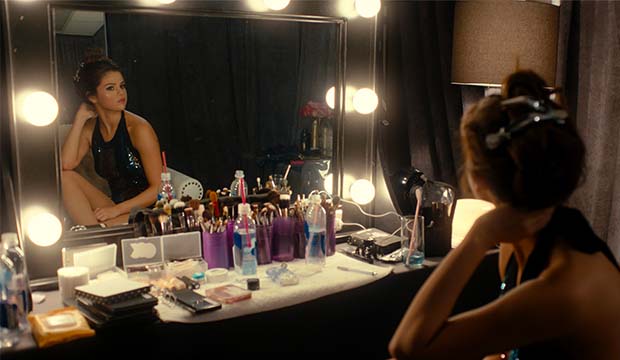 On November 4, 2022, Apple TV+ released “Selena Gomez: My Mind and Me,” focusing on the multi-hyphenate entertainer who was launched into superstardom as a teenager in Disney Channel’s “Wizards of Waverly Place.” Now 30, she stars in the Emmy-winning comedy “Only Murders in the Building” alongside Steve Martin and Martin Short and is the most followed musician and actress on Instagram.

After achieving unimaginable stardom, an unexpected turn pulled her into darkness. This uniquely raw and intimate documentary spans her six-year journey into a new light. Critics and viewers alike have had strong reactions to the film, resulting in a perfect score of 100% on Rotten Tomatoes.

SEE Selena Gomez opens up in ‘My Mind & Me’ trailer: Watch now

David Ehrlich of IndieWire draws comparisons between Gomez and other young pop stars. “Now it’s Selena Gomez’s turn, and after her public struggles with lupus, bi-polar disorder, and Justin Bieber, it’s no surprise that she can bare her soul with the best of them…Directed by Alek Keshishian — who all but invented this entire sub-genre with ‘Madonna: Truth or Dare’ more than 30 years ago — ‘Selena Gomez: My Mind & Me’ follows a similar template as its predecessors, and primarily serves as a chance for the cherubic ‘Love You to Love Me’ singer to set the record straight on the various issues that strangers have used to define her.” The viewer gets a complete view of Gomez, both the good and the messy. “It’s not a movie about healing so much as a movie about learning to hurt in the healthiest way possible.” In the end, the film “spends much, much more time in doctors’ offices than it does in recording studios, and while the singer’s wealth isn’t exactly a secret, the film eschews the benefits of stardom without belaboring its burdens…Asked what she might do next, Gomez suggests that her stage and screen career is just a runway for the philanthropy she hopes to do with the rest of her life.” Wherever that leads, count us in!

Ema Sasic of Next Best Picture notes that in 2016, Gomez was on top of the world and by the end of her concert tour, well, she took a self-imposed break. “Even though Gomez’s life has been covered every which way from a young age, Keshishian manages to capture new and revealing pieces of the pop star’s life. One of the most touching aspects of the documentary is the way it shows Gomez evolving from a young talent who felt like she had to fit a certain image of a star to a woman focused on fueling her heart and passions and helping those around her. Gomez admits she’s still a work in progress by the end of the film, but that appears to be OK at this point in her life compared to any other.” Sasic continues, “Through all the ups and downs, Gomez makes it quite clear she doesn’t like the fame part of her life. Instead, what makes her happiest is getting away from the mind-numbing noise around her and connecting with people.”

Chris Willman of Variety praises the film for presenting the attributes that viewers already love Gomez for while showing the struggles that she hid behind the scenes. “Of all the portrayals of pop superstars that have been produced in-house in recent years, ‘My Mind & Me’ is probably the one with the least celebratory third act … which is something to celebrate. It’s not headed toward a downbeat finish, either, but the fact that the filmmakers don’t manufacture a way to end on a pep rally sets this film apart from the wave of docs in which minor crises of conscience or even colds become easily resolved plot points on the way to a big closing stadium show.” Willman adds, “Probably the most riveting sequence in the doc is a segment when Gomez submits herself to a series of quick, banal (to put it mildly) Q&As that barely skim the surface of the issues that now interest her.” If you are expecting a lot about her famous ex, look elsewhere. “The increased affection of a nation of Selena stans is not remotely what’s going to keep her grounded, but fortunately, she didn’t have to lose us to love herself.”

Carson Timar of ButteredPopcorn writes, “The film is undeniably effective at crafting an honest and compelling portrait of the artist.” Even though the hurdles were numerous, Gomez emerges the victor. “This is a rather beautiful message and Gomez stands tall as a worthy role model throughout the project…There is nearly no reason thematically why the film had to wait for release until 2022 with the portrait of Gomez feeling somewhat distant from where the artist is today. The poignance of the piece would have been exponentially more impressive had it come out in 2020 or even 2021.”