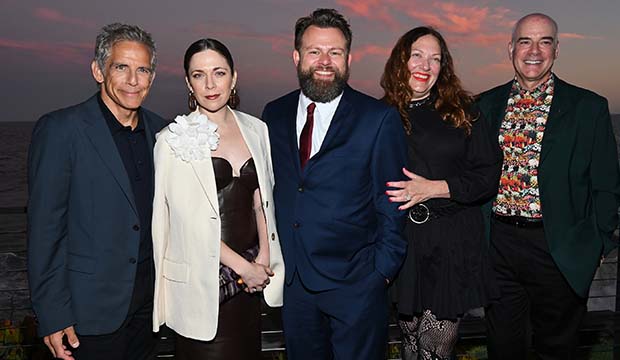 “I wrote the very first version of the pilot while I was working at a door factory,” revealed “Severance” creator Dan Erickson at a special Emmys FYC event on Sunday night. “It was the first job I could find when I first moved to L.A. It was off of a Craigslist post. I started to hate my life so intensely that the idea of the show just came out.”

Feelings of discontent or hating anything seemed to be completely severed at the gathering inside Nobu Malibu, cheekily referred to as a “Lumon Corporate Retreat.” Waves crashed onto the sandy beach below as guests including PGA members, industry insiders, entertainers and select media enjoyed caviar, champagne and Japanese cuisine. The darkly sinister, yet whimsical soundtrack composed by Emmy nominee Theodore Shapiro set the tone.

Erickson was joined by director Ben Stiller, actress Jen Tullock, casting director Rachel Tenner and set decorator Andrew Baseman for a fun panel hosted by Oscar and Emmy nominee Kumail Nanjiani. The writer explained that the basic story and most of the characters have remained the same, but because he had never actually worked on a show before, Stiller helped him develop the full story.

“I was trying to get noticed,” Erickson admitted. “Once you have the reality of actually making it, then you get the question, ‘How do you make something that’s emotionally rounded enough to continue this and make it a show we can watch for a long time?’ Once Ben and I started talking about it we really started focusing more on the human elements.”

SEE Adam Scott on how his obsession with ‘The Twilight Zone’ led him to ‘Severance’: ‘This was everything I wanted to do’ [WATCH]

“There was such a specificity in the writing and in the language,” Stiller elaborated. “For me it just jumped off the page. It was this really familiar kind of banter and tone that reminded me of these great workplace comedies like ‘Office Space’ or ‘The Office’ or ‘Parks and Rec.’ There’s a certain energy and rhythm that has become a genre over the last 20 years in American comedy. It felt like a workplace comedy, but then he’s taking this other element and throwing it into this surreal world. It was a matter of just developing that.”

“Severance” has been nominated for 14 Emmys, including Best Drama Series. It’s the first nomination in that category for Apple TV+, which snagged a Best Comedy Series win last year for “Ted Lasso.” When asked for any teases regarding Season 2, Stiller simply responded, “There are things that are going to happen that are going to be really fun to watch.”