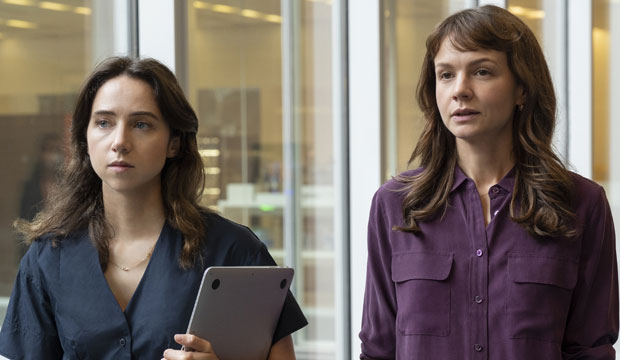 On October 5, 2017, journalists Jodi Kantor and Megan Twohey from The New York Times revealed damning allegations of sexual misconduct by Hollywood producer Harvey Weinstein. He was accused of sexually harassing actresses, female production assistants, temps and other employees at Miramax and The Weinstein Company. The allegations helped propel the #MeToo movement and would eventually lead to Weinstein being sentenced to 23 years in prison.

In 2019, Kanto and Twohey published “She Said,” a book detailing how the story unraveled and their worldwide search for victims of the Oscar-winning movie mogul. Now, a film of the same name from director Maria Schrader is making waves after premiering at the New York Film Festival in October and nationwide on November 18.

Zoe Kazan and Carey Mulligan star as Kantor and Twohey, delivering explosive, dramatic performances as the duo that will stop at nothing to bring Weinstein’s accusers forward. At a November 4 screening for AFI Fest at the historic TCL Chinese Theatre in Los Angeles, a packed house roared with enthusiasm as we were transported into the world of investigative journalism. Booming cheers followed a scene in which Mulligan, at the end of her wits, screaming at a man to “Fuck off!”when he refuses to cease his sexual advances at a local pub. Later, a collective gasp, followed by silence and finally a thunderous applause filled the theater as actress Ashley Judd appeared, as herself, detailing her traumatic story, her blacklisting from Hollywood and her willingness to publicly come forward.

In addition to Judd, actresses Rose McGowan and Gwyneth Paltrow (who Weinstein seemed disturbingly obsessed with) are key players in the story, but don’t appear onscreen.

While I sat in the middle of this audience of cinema lovers, it struck me how much we all adored this movie that ripped the film industry to shreds. How many people had been covering for this monster? And how many other men were just like him? The very business we adored was so incredibly flawed, and watching this film unfold felt like justice for something that tainted the industry. Will Hollywood now embrace the film throughout the upcoming awards season? Or will they view it as an embarrassing reminder of their utter failure to protect women?

My instinct is that the film will be embraced, as it immediately reminded me of 2015’s Best Picture, “Spotlight.” Like “She Said,” Tom McCarthy‘s film centered on a true story about investigative journalists uncovering a sex scandal. A film about writing, uncovering secrets and and exposing truths will always resonate with Oscar voters. They’ll want to reward a film that shows this dark, horrific chapter has closed.