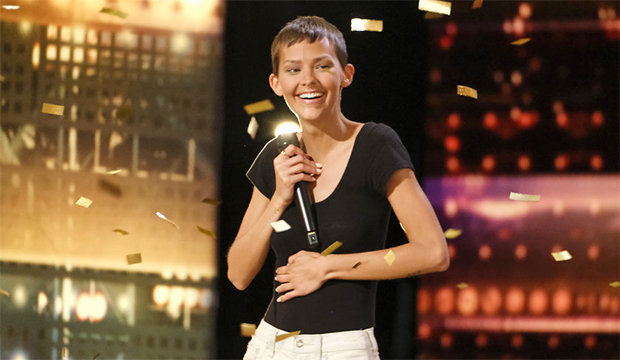 “There was something really special about Jane. I adored her,” declared “America’s Got Talent” judge Simon Cowell during the July 5 episode that looked back at the Top 15 “AGT” Golden Buzzers of all time. He was referring to Jane Marczewski, known professionally as Nightbirde, who earned the #1 spot on his list. Nightbirde received the coveted honor during the 2021 season thanks to her original song “It’s Okay” about living with cancer. The singer-songwriter later withdrew from the competition due to health complications and passed away six months later at age 31.

Simon broke down while re-watching her Golden Buzzer moment with host Terry Crews. “You know, it’s difficult, I actually haven’t been able to watch this” video since Nightbirde died, the British judge confessed with teary eyes.

On the year-old video, Nightbirde remained hopeful about her condition, telling the “AGT” judges, “It’s important that everyone knows I’m so much more than the bad things that happened to me.”

Simon continued on, “What was so special about Jane in my opinion was she was always optimistic. But she recently passed away, which makes this tough. All she ever kept talking about was her music.”

After watching Nightbirde finish her performance of “It’s Okay” up on the big screen, Terry and Simon both had trouble speaking. “I don’t know what to say,” Terry stated. Simon instructed someone off-camera, “Give me two seconds.”

SEE ‘America’s Got Talent’: Is Sofia Vergara really a ventriloquist?

One of Nightbirde’s most influential quotes was included in the video package: “You can’t wait until life isn’t hard anymore before you decide to be happy.” That’s the moment where Simon decided to push the Golden Buzzer.

Watching the scene play out, an emotional Terry noted, “The amazing strength she showed in the midst of incredible adversity, it was a lesson for all of us … I feel like I’m watching an angel.”

“The last time I saw her, she did say what that moment meant to her,” Simon recalled. “All these years she’d been trying to get recognition as a songwriter, as a singer, and in an instant everything changed for her. I promise you, so many people come up to me and talk about what she did, giving people hope and perspective with the lyric of that song. She typifies I think what the Golden Buzzer is all about. Watching it back, it makes you feel hopeful. Her Golden Buzzer will live on forever. No one else in my opinion could be number one.”

NBC’s reality TV show ended with this note about Nightbirde’s lasting impact on the world: “Jane’s family has started The Nightbirde Foundation in her memory to help other young women with cancer. NightbirdeFoundation.org”