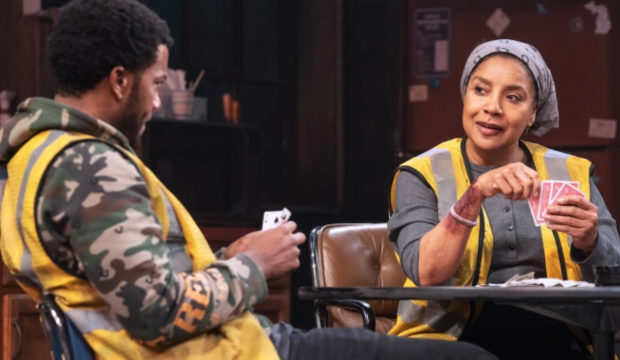 Ten days after her first Broadway show ended an acclaimed run, playwright Dominique Morisseau has just opened another. The Tony-nominee penned the libretto for musical “Ain’t Too Proud: The Life and Times of The Temptations,” which closed after nearly 500 performances on Jan. 16, and her drama “Skeleton Crew” has now finally made the leap from Off-Broadway to the Samuel J. Friedman Theatre on Jan. 26. Set in Detroit in 2008, the play is about the impact of the looming closure of a steel plant on four of its workers.

Ruben Santiago-Hudson directs the production, returning to the Friedman just two months after he wrapped performances of his own play “Lackawanna Blues” at the venue. Phylicia Rashad stars as Faye, a factor worker and union rep on the cusp of her thirtieth anniversary working at the plant; the play marks Rashad’s return to Broadway after over a decade away. Chanté Adams, Joshua Boone, Brandon J. Dirden, and Adesola Osakalumi round out the ensemble.

“Skeleton Crew” received strong notices from critics. Jesse Green (New York Times) calls the show a Critic’s Pick, writing that it is “so adroitly built and written” and “so beautifully staged and acted.” He commends Rashad’s “wonderfully ungrand performance” and calls Dirden “terrific.” Though he quibbles that Morisseau’s plot devices feel “a bit creaky with use,” he also shares that “it’s a pleasure to surrender to classic craftsmanship.” Green also offers kudos to Michael Carnahan’s “pulp poetry” set design and Emilio Sosa’s costumes.

Ayanna Prescod (Variety) deems “Skeleton Crew” a “moving drama with pristine delicacy” that boasts Santiago-Hudson’s “masterful direction.” Prescod applauds Rashad, Boone, and Dirden, but calls Adams’ turn as the pregnant, ambitious line-worker Shanita the “standout performance.” She likewise highlights Morisseau’s work as dramatist, writing that “like the production line, every moment is judiciously planned and carefully assembled,” and emphasizing how the play “gives life and nuance to working-class people often portrayed as one-dimensional.”

Helen Shaw (Vulture) is a little less enamored. Noting how the Off-Broadway productions of the show “flourished” in their small, pressure-cooker theaters, she writes that the transfer to a bigger venue has dampened the impact of the play. Though she calls Morisseau “the modern-day bard of Detroit,” she feels that in the Friedman theater “Morisseau’s carefully banked fires start to flicker.” She commends Dirden as “good (as he always is),” but saves her biggest praise for Rashad: “She takes on the spirit of the underlying play, becoming something like the personification of labor itself. She turns into something larger and more commanding than the merely individual drama around her, and all of Broadway turns to look.”

“Skeleton Crew” kicks off the second half of the 2021-2022 Broadway season strongly as a likely Tony Awards contender. Not only does the play boast glowing reviews and mark the estimable Morisseau’s first drama to arrive on Broadway, but it’s also an important work that movingly tackles the human toll of the 2008 global financial crisis. In recent years, Lynn Nottage’s “Sweat,” which is about factory closures in Reading, Pennsylvania, performed well with Tony nominators and “Skeleton Crew” could follow a similar trajectory. Although the play categories are especially crowded this season with 10 new works scheduled to open – “Pass Over,” “Chicken & Biscuits,” “Is This a Room,” “Thoughts of a Colored Man,” “The Lehman Trilogy,” “Dana H.,” “Clyde’s,” “The Minutes,” and “Birthday Candles” – “Skeleton Crew” will very likely make the top five.

After nearly fifteen years away, Rashad makes a triumphant return to the Broadway stage and seems primed to earn Tony recognition, too. She has one trophy already for Lorraine Hansberry’s “A Raisin in the Sun” and a nomination for August Wilson’s “Gem of the Ocean.” Her moving performance at the heart of Morisseau’s work joins a growing list of applauded turns by lead actresses on stage this year, which includes Emily Davis (“Is This a Room”), Deirdre O’Connell (“Dana H.”), and LaChance (“Trouble in Mind”), with buzzy turns from Sarah Jessica Parker (“Plaza Suite”), Mary-Louise Parker (“How I Learned to Drive”) and Ruth Negga (“Macbeth”) also in the offing.

“Skeleton Crew” might also make a showing in two other key categories. Director Ruben Santiago-Hudson is having a stellar year on Broadway and will contend for four nominations as playwright, performer, and director of “Lackawanna Blues” and director of “Skeleton Crew.” If “Lackawanna” is represented in Best Revival, nominators may choose to acknowledge his directorial efforts on Morisseau’s work, which would be his second nomination in the category following “Jitney” in 2017; he has a Tony as an actor for Wilson’s “Seven Guitars.” Brandon J. Dirden has worked wonders with Santiago-Hudson before in “Jitney” in a performance that deserved Tony recognition, and he could slip into the Featured Actor race now. Green writes that when Dirden and Rashad act together “you can’t look away from the many things they’re doing at once.” If voters love Rashad’s turn, they might want to check off his name, too.