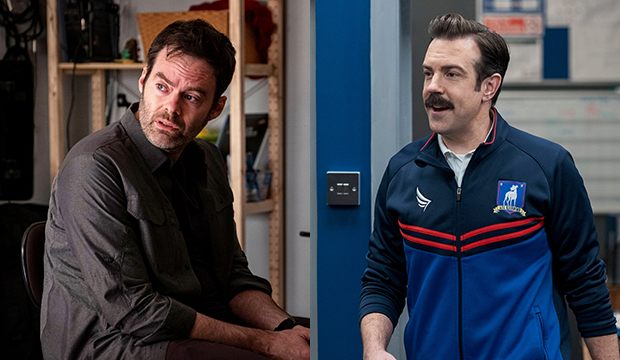 Two popular “Saturday Night Live” alumni — Bill Hader and Jason Sudeikis — are going mano a mano this Emmy Award season. The big question for Emmy voters: Will they choose Sudeikis’ adored feel-good Apple TV + “Ted Lasso,” which was the big winner last year, or take a walk on the dark side with Hader’s breathlessly bleak and audacious HBO comedy “Barry”? The latter won six Emmys in its first two seasons including back-to-back acting honors for Hader in 2018 and 2019.

This is the first time the one-time castmates will be competing against each other. Because of the pandemic, “Barry” was MIA on HBO for three years.

As of now, the sophomore year of “Ted Lasso” is leading in our odds to repeat its major Emmy wins including series, actor, supporting actor for Brett Goldstein and supporting actress for Hannah Waddingham. There were many memorable episodes in season 2 including, most notably, the Christmas installment. It was funny, clever and probably would have made Scrooge cry and I’m talking Scrooge before he met those three ghosts.

But darkness crept into the second season of the folksy, optimistic world of Ted, the Jimmy Stewart/Gary Cooper-esque “Everyman” American college football coach hired by the owner of the Richmond English soccer team to spite her ex-husband. But what about those panic attacks Ted? He finally reveals his father committed suicide when Ted was just 16. And he’s betrayed by Nate (Nick Mohammed), the timid waterboy made an assistant coach by Ted only to become the series’ villain in the second season finale.

During his 10-year tenure on “SNL” (his first two years was as a writer), Sudeikis excelled at playing jerks such as Pete Twinkle, a sportscast who hosted obscure women’s sports or the happy-go-lucky the Devil, a frequent “Weekend Update” guest. And he brought this comic attitude to such films as the two “Horrible Bosses” comedies and 2013’s “We are the Millers.” He’s shown more versatility subsequently even portraying the Black Olympic runner Jesse Owen’s coach in the 2016 drama “Race.”

Sports have always been part of Sudeikis’ life. After graduating from high school in Kansas, he went to a local junior college on a basketball scholarship. Then comedy got in the way. He gave up the skyhook and went to Chicago where he performed with several improv companies including the Second City National Touring Company. He told me in a 2016 L.A. Times interview that had he stayed in college, he probably would have been a real-life version of Ted Lasso “teaching drama and coaching basketball at some school in Kansas.  I still might, for all we know. It’s not lost on me.”

I am still Team Ted when it comes to Best Comedy Series and Best Supporting Actress, but as the third season of “Barry” unfolded, it became apparent that Hader and co-star Henry Winkler have taken things to the next level acting wise. Ditto on the episodes he wrote and directed of this sharp and often violent comedy about a hit man from Cleveland sent to Los Angeles for a kill who ends up in an acting class lead by the obnoxious Gene Cousineau (Winkler).

The show has been progressively darker with the third season being, at times, difficult to watch as Barry goes deeper into depression as he returns to contract killing. The finale even finds someone eaten to death by a panther (we just hear it thank God) and Barry’s girlfriend Sally (Sarah Goldberg) beating to death a biker who has been sent to murder Barry. And Gene demonstrates just how good of an actor he is when gets his revenge for Barry murdering his police detective girlfriend.

Hader, who has already received Emmy nomination for directing and writing “Barry,” grows substantially as both in the third season.  The penultimate episode finds Barry hovering between life and death after he is poisoned by the widow of an old military friend he murdered. Barry hallucinates he’s on a beach with all the people he’s murdered. The beach scenes are almost Bergman-esque in style. And what makes the episode even more powerful is that Barry never utters a word. Hader channels such directors as Orson Welles and Jean Renoir in the finale’s silent final minutes shooting it in deep focus forcing viewers to pay attention

It’s hard to believe that Hader, best known as the giggly Weekend Update guide Stefon who knew all about New York, find his greatest success as a paid assassin. But then Hader had rather eclectic film tastes as a young boy telling me in 2014 that growing up in Oklahoma, he was obsessed with movies. “I would watch movies at night with my family and go to the movie theater,” Hader recalled. “That was my existence.”

He had movie nights with his father; make that late-night movies. His father frequently would wake him up after the news. “He would let me come down and watch them with him- whatever was on Cinemax or HBO. I remember ‘The Wild Bunch’ and ‘A Clockwork Orange.’ I had never seen anything like ‘A Clockwork Orange.’ I remember being in fifth grade and watching ‘Taxi Driver’ at night and it totally changing my world. Just going ‘What is this?’’’