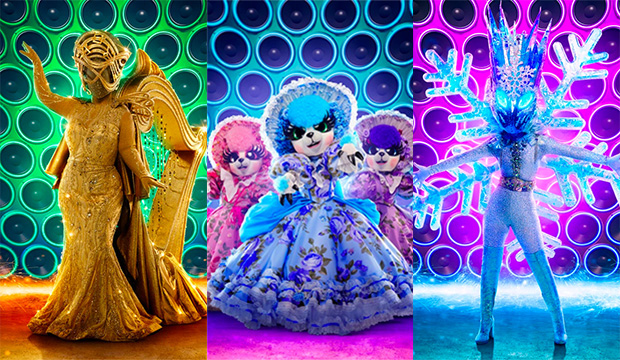 Wednesday night on Fox, “The Masked Singer” solidified the final piece of the impending semi-finals when Snowstorm won her contest against Scarecrow (who quit) and Sir Bug a Boo (who lost the battle royale). Thus, the three contestants facing off in “The Masked Singer” semi-finals are Harp, Lambs and Snowstorm. Mark your calendars for Thursday, November 24 (aka Thanksgiving night!) as that’s when these three costumes will face off head-to-head-to-head in front of the studio audience and panelists Robin Thicke, Jenny McCarthy, Ken Jeong and Nicole Scherzinger to see who advances to the grand finale.

Harp was the first to earn her spot in the semi-finals after she outlasted a whopping seven costumes throughout the first round. On the “Royal Season Premiere,” she strummed “Perfect” and bested Knight (William Shatner), Hedgehog (Eric Idle) and Hummingbird (Chris Kirkpatrick). Next was “Vegas Night,” where she belted out “I Have Nothing” and took down Pi-Rat (Jeff Dunham) and Panther (Montell Jordan). And on “TV Theme Night,” her song choice of “Thank You for Being a Friend” earned more votes than Mummies (Mike Lookinland, Barry Williams, Christopher Knight) and Fortune Teller (Daymond John).

In the second round, Robo Girl (Kat Graham) started out strong as she defeated Maize (Mario Cantone) and Mermaid (Gloria Gaynor) on “Andrew Lloyd Webber Night.” However, when Lambs joined the competition on “Muppets Night,” they stole Robo Girl’s crown and also took down Beetle (Jerry Springer) thanks to their cover of “Hot n Cold.” The following week, Lambs bleated out “Ironic” and won over Walrus (Joey Lawrence) and Milkshake (Le’Veon Bell) on “90s Night.”

The third round began with Bride (Chris Jericho) winning “Hall of Fame Night” over Venus Fly Trap (George Foreman) and Gopher (George Clinton). Snowstorm then made her debut on “Comedy Roast Night” and impressed the panelists with her rendition of “Thank U, Next,” which scored more votes than Bride and Avocado (Adam Carolla). The ice-cold costume won again on “Fright Night” when she shivered to “Sweet But Psycho,” beating Scarecrow and Sir Bug a Boo.

So which secret celebs do YOU think are hiding inside the Harp, Lambs and Snowstorm costumes? And which two contestants are you predicting to win the semi-finals and advance to next week’s grand finale? Be sure to sound off down in the comments section. The Thanksgiving-themed “The Masked Singer” semi-finals airs Thursday night at 8/7c on Fox. 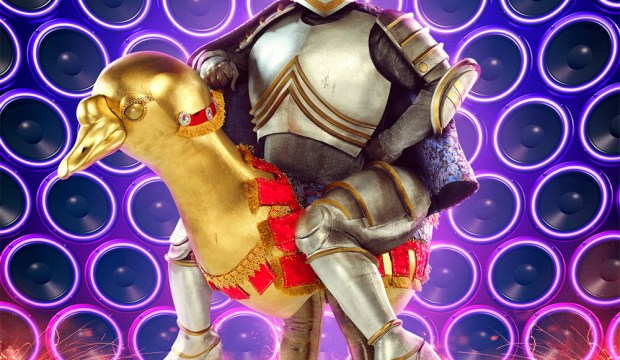