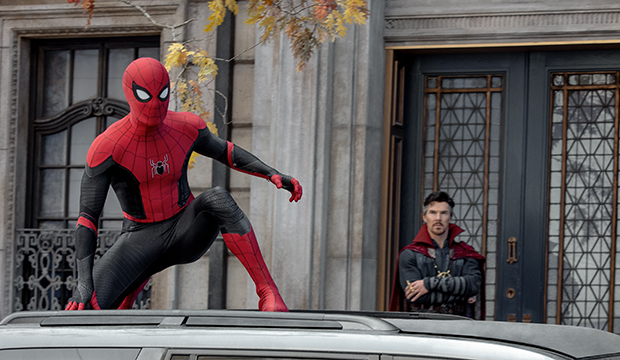 Peter 3? More like Oscar contender 1. Andrew Garfield reprised his role as Peter Parker from “The Amazing Spider-Man” (2012) and its 2014 sequel in the latest Marvel Cinematic Universe movie, “Spider-Man: No Way Home,” and it couldn’t have come at a better time.

Although the “tick, tick… BOOM!” star denied time and again he was in the film, his big screen return alongside that of Tobey Maguire — who portrayed the famous web-slinger in Sam Raimi’s beloved trilogy in the 2000s — was the highlight of the action-packed movie, which also saw the return of multiple villains from the duo’s combined five films and may have just concluded Tom Holland’s tenure as the titular superhero. Garfield didn’t waste a minute of his screen time in the multiversal adventure, making every moment count after falling one movie short of his own trilogy when Sony canceled his franchise in 2015 to bring a new Spidey into the MCU. Very much aware of this, the “No Way Home” team gave Garfield’s Peter Parker the closure he lacked in hilarious and emotional ways. Fans have been raving about his performance, which revealed his range as an actor and really allowed him to showcase his comedic chops.

Garfield’s scene-stealing turn — particularly during the third act battle sequence that has fans calling for a third “Amazing Spider-Man” film and reappraising his original tenure — is why he may get a bigger Oscar campaign boost from the superhero movie, if such a thing exists, than his co-star Benedict Cumberbatch, who reprised his role as Doctor Strange and is the person responsible for everyone being brought into the MCU from other universes. Both men are currently doing just fine in the Oscar odds for Best Actor, though, and are strong enough to win without any Spidey aid.

Cumberbatch, who stars in Jane Campion’s 1920s-set Western “The Power of the Dog” opposite Jesse Plemons and Kirsten Dunst (the Mary Jane Watson to Maguire’s Peter Parker), is in second place with 4/1 odds in Gold Derby’s combined odds. With four Experts predicting him to win, he trails only Will Smith of “King Richard,” who has 17/5 odds and 18 Experts and eight Editors convinced he’ll triumph. Cumberbatch gives a strong performance and has been considered a lock for a nomination for months now.

But Garfield is hot on his heels after rising swiftly in the odds following the debut of Lin-Manuel Miranda’s “Tick, Tick… Boom!” in November. Garfield plays the late Jonathan Larson in the sleeper hit and is now in third place with 11/2 odds and three Experts and one Editor predicting him to win after seemingly becoming a fan favorite overnight. Both men have been killing it on the critics awards circuit too.

But that’s hardly surprising. “Spider-Man: No Way Home,” like the rest of the MCU, is littered with acting talent. In addition to Cumberbatch and Garfield, both former Best Actor nominees, the movie also stars Oscar winners Marisa Tomei and Jamie Foxx, as well as Oscar nominees Willem Dafoe, Thomas Haden Church and Tom Hardy (the last of whom appears in a cameo during the mid-credits scene). So perhaps Garfield’s participation in the movie after months spent denying his involvement isn’t the least surprising thing about the film; rather, it’s that the movie features two actors who might be nominated for Best Actor for their work in other films.