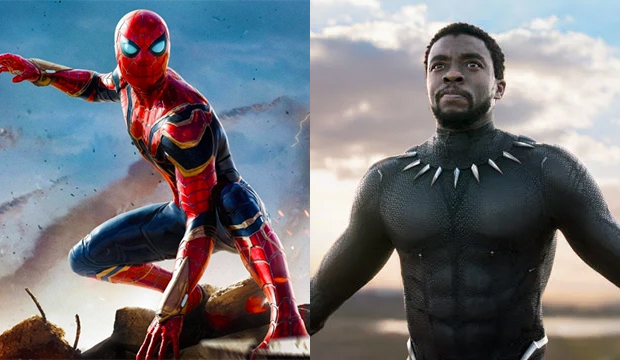 In the epic Marvel money showdown between Spider-Man and Black Panther, Spidey has prevailed.

“Spider-Man: No Way Home” just surpassed “Black Panther” at the U.S. box office to become the fourth highest-grossing movie of all time. Theater pundits have been watching this battle play out for weeks, and now it’s official. “Black Panther’s” final box office in the states was $700 million, and “Spider-Man” is now at $704 million and counting. The only films ahead of it on the all-time chart are “Star Wars: Episode VII – The Force Awakens” ($936 million), “Avengers: Endgame” ($858 million) and “Avatar” ($760 million).

For my fellow box office nerds keeping track at home, “Black Panther” crossed the $700 million mark on its 171st day of release (August 5, 2018), while “Spider-Man: No Way Home” achieved that feat in only 32 days (January 17, 2022). In other words, Tom Holland‘s latest stint as Peter Parker still has a lot of money to rake in over the coming weeks. Just how high can it go?

Right now at Gold Derby, you can predict which movies will earn the #1 through #5 spots at the U.S. box office for this weekend, January 21 – January 23. You can also forecast how much money the weekend’s highest-grossing film will rake in. Hurry — the cutoff time is Thursday at 6 p.m. PT. Each week the eligible user with the highest prediction accuracy will win a $100 Amazon gift card, eternal bragging rights and a spot on our box office 2022 leaderboard.

“Spider-Man” has been such a success story that even “Saturday Night Live” wanted to get in on the buzz. During the most recent episode, James Austin Johnson‘s President Joe Biden blamed the Omicron surge in America on the Sony/Marvel superhero. “Stop. Seeing. Spider-Man,” he repeatedly ordered his fellow Americans. Watch the cute sketch below:

SEE Users Leaderboard: Box Office Predictions 2022 — Where do YOU rank?

It’s free to register for an account via email, Facebook, Google or Twitter, so what are you waiting for? Be sure to make your predictions to influence our box office racetrack odds. You can keep changing them throughout the week until the cutoff time on Thursday at 6 p.m. PT. Financial numbers and rankings are based upon weekend data (Friday-Saturday-Sunday) featured at Variety Insight. (See our contest rules.) Sound off with other fans in our movie forum.